The military order below called for the forced deportation and removal of the Cherokee people from the Southeastern United States. The Cherokee called this  The Trail of Tears. The exhibition designers of the Native Voices exhibition explain,

The U.S. Department of War forcibly removes approximately 17,000 Cherokee to Indian Territory (which is now known as Oklahoma). Cherokee authorities estimate that 6,000 men, women, and children die on the 1,200-mile march called the Trail of Tears. Other Cherokee escape to North Carolina, where they elude capture and forced removal. Their descendants remain in their homeland in the Great Smoky Mountains to this day. Many tribes in the Southeast, the Northeast, and Great Plains have their own trails of tears.

According to the National Park Service, “100,000 American Indians [were] forcibly removed from what is now the eastern United States to what was called Indian Territory included members of the Cherokee, Choctaw, Chickasaw, Creek, and Seminole tribes.”

When introducing the document below, it is important to remember who wrote it, for what purpose, and whose voices don’t we hear. 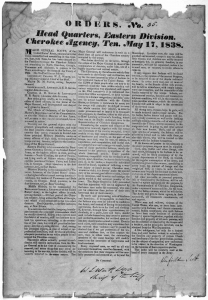 Image courtesy of the Library of Congress

MAJOR GENERAL SCOTT, of the United States’ Army, announces to the troops assembled and assembling in this country, that, with them, he has been charged by the President to cause the Cherokee Indians yet remaining in North Carolina, Georgia, Tennessee and Alabama, to remove to the West, according to the terms of the Treaty of 1835. His Staff will be as follows:

Any order given orally, or in writing, by either of those officers, in the name of the Major General, will be respected and obeyed as if given by himself.

The Chiefs of Ordnance, of the Quarter-Master’s Department and of the Commissariat, as also the Medical Director of this Army, will, as soon as they can be ascertained, be announced in orders.

To carry out the general object with the greatest promptitude and certainty, and with the least possible distress to the Indians, the country they are to evacuate is divided into three principal Military Districts, under as many officers of high rank, to command the troops serving therein, subject to the instructions of the Major General.

Eastern District, to be commanded by Brigadier General Eustis, of the United States’ Army, or the highest officer in rank, serving therein:—North Carolina, the part of Tennessee lying north of Gilmer county, Georgia, and the counties of Gilmer, Union, and Lumpkin, in Georgia. Head Quarters, in the first instance, say, at Fort Butler.

Western District, to be commanded by Colonel Lindsay, of the United States’ Army, or the highest officer in rank serving therein:—Alabama, the residue of Tennessee and Dade County, in Georgia. Headquarters, in the first instance, say, at Ross’ Landing.

Middle District, to be commanded by Brigadier General Armistead of the United States’ Army, or the highest officer in rank, serving therein:—All that part of the Cherokee country, lying within the State of Georgia, and which is not comprised in the two other districts. Head Quarters, in the first instance, say, at New Echota.

It is not intended that the foregoing boundaries between the principal commanders shall be strictly observed. Either, when carried near the district of another, will not hesitate to extend his operations, according to the necessities of the case, but with all practicable harmony, into the adjoining district. And, among his principal objects, in case of actual or apprehended hostilities, will be that of affording adequate protection to our white people in and around the Cherokee country.

The senior officer actually present in each district will receive instructions from the Major General as to the time of commencing the removal, and everything that may occur interesting to the service, in the district, will be promptly reported to the same source. The Major General will endeavor to visit in a short time all parts of the Cherokee country occupied by the troops.

The duties devolved on the army, through the orders of the Major General & those of the commanders of districts, under him, are of a highly important and critical nature.

The Cherokees, by the advances which they have made in Christianity and civilization, are by far the most interesting tribe of Indians in the territorial limits of the United States. Of the 15,000 of those people who are now to be removed—(and the time within which a voluntary emigration was stipulated, will expire on the 23rd instant—) it is understood that about four-fifths are opposed, or have become averse to a distant emigration; and altho’ none are in actual hostilities with the United States, or threaten a resistance by arms, yet the troops will probably be obliged to cover the whole country they inhabit, in order to make prisoners and to march or to transport the prisoners, by families, either to this place, to Ross’ Landing or Gunter’s Landing, where they are to be finally delivered over to the Superintendant of Cherokee Emigration.

Considering the number and temper of the mass to be removed, together with the extent and fastnesses of the country occupied, it will readily occur, that simple indiscretions—acts of harshness and cruelty, on the part of our troops, may lead, step by step, to delays, to impatience and exasperation, and in the end, to a general war and carnage—a result, in the case of those particular Indians, utterly abhorrent to the generous sympathies of the whole American people. Every possible kindness, compatible with the necessity of removal, must, therefore, be shown by the troops, and, if, in the ranks, a despicable individual should be found, capable of inflicting a wanton injury or insult on any Cherokee man, woman or child, it is hereby made the special duty of the nearest good officer or man, instantly to interpose, and to seize and consign the guilty wretch to the severest penalty of the laws. The Major General is fully persuaded that this injunction will not be neglected by the brave men under his command, who cannot be otherwise than jealous of their own honor and that of their country.

By early and persevering acts of kindness and humanity, it is impossible to doubt that the Indians may soon be induced to confide in the Army, and instead of fleeing to mountains and forests, flock to us for food and clothing. If, however, through false apprehensions, individuals, or a party, here and there, should seek to hide themselves, they must be pursued and invited to surrender, but not fired upon unless they should make a stand to resist. Even in such cases, mild remedies may sometimes better succeed than violence; and it cannot be doubted that if we get possession of the women and children first, or first capture the men, that, in either case, the outstanding members of the same families will readily come in on the assurance of forgiveness and kind treatment.

Every captured man, as well as all who surrender themselves, must be disarmed, with the assurance that their weapons will be carefully preserved and restored at, or beyond the Mississippi. In either case, the men will be guarded and escorted, except it may be, where their women and children are safely secured as hostages; but, in general, families, in our possession, will not be separated, unless it be to send men, as runners, to invite others to come in.

It may happen that Indians will be found too sick, in the opinion of the nearest Surgeon, to be removed to one of the depots indicated above. In every such case, one or more of the family, or the friends of the sick person, will be left in attendance, with ample subsistence and remedies, and the remainder of the family removed by the troops. Infants, superannuated persons, lunatics and women in a helpless condition, will all, in the removal, require peculiar attention, which the brave and humane will seek to adapt to the necessities of the several cases.

All strong men, women, boys & girls, will be made to march under proper escorts. For the feeble, Indian horses and ponies will furnish a ready resource, as well as for bedding and light cooking utensils—all of which, as intimated in the Treaty, will be necessary to the emigrants both in going to, and after arrival at, their new homes. Such, and all other light articles of property, the Indians will be allowed to collect and to take with them, as also their slaves, who will be treated in like manner with the Indians themselves.

If the horses and ponies be not adequate to the above purposes, wagons must be supplied.

Corn, oats, fodder and other forage, also beef cattle, belonging to the Indians to be removed, will be taken possession of by the proper departments of the Staff, as wanted, for the regular consumption of the Army, and certificates given to the owners, specifying in every case, the amount of forage and the weight of beef, so taken, in order that the owners may be paid for the same on their arrival at one of the depots mentioned above.

All other moveable or personal property, left or abandoned by the Indians, will be collected by agents appointed for the purpose, by the Superintendant of Cherokee Emigration, under a system of accountability, for the benefit of the Indian owners, which he will devise. The Army will give to those agents, in their operations, all reasonable countenance, aid and support.

White men and widows, citizens of the United States, who are, or have been intermarried with Indians, and thence commonly termed, Indian countrymen; also such Indians as have been made denizens of particular States by special legislation, together with the families and property of all such persons, will not be molested or removed by the troops until a decision, on the principles involved, can be obtained from the War Department.

Alike indulgence, but only for a limited time, and until further orders, is extended to the families and property of certain Chiefs and head-men of the two great Indian parties, (on the subject of emigration) now understood to be absent in the direction of Washington on the business of their respective parties.

This order will be carefully read at the head of every company in the Army.

Chief of the Staff

After reading the document once, read it again consider using the Project Zero thinking routine below:

One of the guiding questions in Re-Imagining Migration’s learning arc is “Why do people leave their homes?” How does this document influence the way you would answer that question?

A second thinking routine can help students recognize the perspective that we are introduced to in this source and the voices we don’t hear. Try facilitating reflection with the By Whom? About Whom? For Whom? routine.