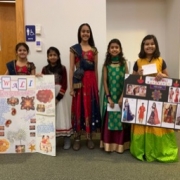 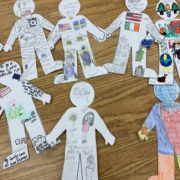 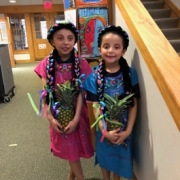 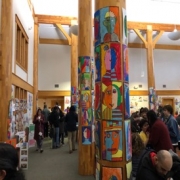 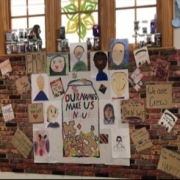 Asking “What’s in a Name?” is a more complex question to ask then we realize.  This article is the story of a school that asked students that question as a way to nurture the dispositions for a world on the move that Reimagining Migration promotes for students to inquire about a world on the move. 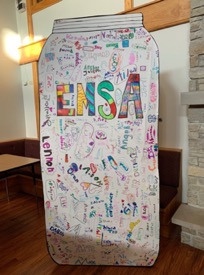 As we established our school- The Elgin Math and Science Academy- a charter school within its second year of operation- we slowly started to put together supports and programs that promote our school’s vision of inclusion and equity.  “Pieces of Me” started off first as a one-night celebration of our school’s diversity in 2019.  It was a night where we displayed projects of self-discovery and celebrating cultures.  It was a success, but we wanted to dig deeper into it.  We were able to with the support of Re-imagining Migration’s Fellowship program in the summer 2019.  We then began to rethink our program from one night a year celebration to a year of learning and self-discovery. We are a primary grade level school that really wanted to give our kids a chance to learn about themselves and a world on the move.  This fellowship program became very eye-opening in relation to the angle and future of this program.

To think about our question, “what’s in a name?” was more than just a simple conversation. We thought a nice way to begin the conversation about the world on the move with Kindergarten through Fourth Grade students would be one of discussing the origins of names. There’s more complexity to this than we realize. Through some professional development and resource curation from Re-imagining Migration, we discovered the book The Name Jar by Yangsook Choi.  This book was an exploration of a young girl from South Korea and her journey towards acceptance of the beauty of her unique name.  We brought this to life for our students.

students.  Many felt sad when students laughed at her name, and others became overjoyed when she made a friend who accepted her name.  This friend then learned about her family and community. When we understand a person’s name, we learn about the world they come from.  As a next step, staff members shared the stories of their names.  In a school-wide assembly, staff members told the stories of the origins of their names in order to model for students what we would like to see in the classroom conversations.  Students began to learn more about adults in the building to understand them and build relationships with them.

As a follow-up activity, weekly, a student was chosen from a classroom “name jar” to speak about the origins of their names.  The students answered a series of questions with their families about the origins of their names.  Many told their class stories about nicknames and relatives and it really brought to life students’ home lives and family origins. 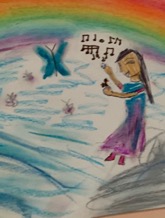 Students began to ask more questions.  “What does your last name mean?” “Why is this important in your language?” “Who were you named after?” It was really a way to start a bigger conversation about differences.  We gave students time to journal.  This journaling was related to their own identities, identities of their peers, and the identities of public figures.

As students began to learn about names, they also began to learn about themselves and each other through weekly “culture crew” programs. Being an EL Education (Expeditionary Learning) school, the crew is a part of our school culture that holds us together. It is a structure that has students becoming actively engaged learners by building a relationship within the classroom. Culture crew is a way the ideas from the Fellowship program were weaved intricately into the crew in our school’s culture.

During “culture crew” we used different readings and media to teach kids about the cultures in our school related to holidays and current events that our community groups honored.  Weekly, they had a discussion, wrote a short piece of writing, or completed an art project related to ideologies learned. Students began to discover each other.

Students and families began to learn more about each other throughout the year.  We worked with families to plan our final night.  We even had a night in January to prepare for our final night where families were able to work together on a family board.  This was a board that represented the meanings of the names of people in families, their daily activities, their home language, and culture. 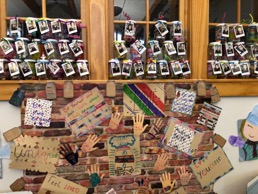 Students designed their own name jars.  These were plastic mason jars that were decoupaged to give a representation of each student’s identity within the building. These projects were ways students were able to communicate across differences and learn about each other in a world on the move.

As students worked on these projects, they learned about themselves, their own cultures, and other cultures.  They began to recognize different struggles their own communities had along with the communities of their peers. Most importantly, they learned their differences were beautiful, and they developed a sense of inclusion amongst the crew.  Stronger respect was developed for the differences of all students in the school.

In a survey given to students after the project was over in March, 90% of 2nd to 4th graders stated that “learning about the cultures of peers in their crew was important to them.”  About the same amount stated that they  “had pride in their family’s cultures and traditions.”

Students and families were able to see the action they wanted to take come to life in March.  We had a night where families got to view each other’s family boards, student jars, and even student Picassos and “self-portraits” made in art class.  There were student speeches, dance performances, songs, and demonstrations.  There was also a family fashion show where families wore fashions that displayed their cultures and identities.  We also had food samplings of families’ favorite and traditional dishes. We called it our “Pieces of Me” Identity Affirmation Festival.  It was a night where we celebrated learning more about students’ names and their own self-exploration.

Students learned about their voices, at a young age.  They learned that using their voice they can learn about each other and connect. When they connect, they can empathize with each other. They can also be heard. Learned at a young age, these “soft skills” can support them in a world that is always on the move.

***This project was funded by the Teaching Tolerance Educator Grant.

Fernande Raine: Are you Building Your Civic Muscle?: How to use History to...