According to a newly released report from the United Nations Refugee Agency, “70.8 million children, women and men were forcibly displaced at the close of 2018, the highest number in the organization’s almost 70-year history.” That number is up from last year and has doubled in the last twenty years. One person is forcibly displaced every two seconds and half of them are children. While those numbers can be staggering, it is important to remember that migration is a human story.

While the Refugee Convention spells out legal rights and responsibilities toward refugees and asylum seekers, too often these obligations remain unfulfilled. We believe that the experiences of refugees raise fundamental questions about our moral and ethical responsibilities to some of the most vulnerable people on our planet, people have who have so often proven that they have so much to contribute, if they only were given a chance.

Below are a series of resources we have collected that you can use with students to illuminate their stories. You can learn more about World Refugee Day here. 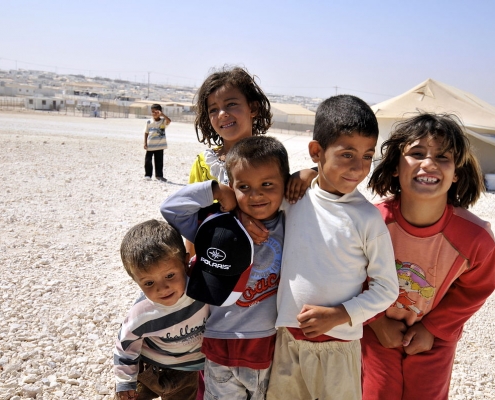 Collection: Save the Children

We recently developed this resource in collaboration with the Jill Weiss Simins at the Indiana State Library, Indiana Historical Bureau and Hoosier State Chronicles. Save the Children is a selection of documents that is centered on the Wagner-Rogers Bill – it explores American attitudes toward the legislation and toward child refugees who were fleeing Nazi terror. We encourage you to take a look at the primary sources with our teaching ideas.

Learning Arc Question
Ambiguous Status: Who is responsible for people in the in-betweens?

This short film tells us the story of Fatima, a nine-year-old refugee as she navigates her new life in Sweden after fleeing her home, Syria, due to war. We learn about Fatima’s experiences through her narration and animated versions of her drawings. What follows as she arrives in a new land? What is her new life like?

How can schools prepare their teachers to support the academic and personal growth of refugee and immigrant-origin youth, particularly those who have experienced trauma? This blog, originally by Leah Shafer and Bari Walsh in Harvard Graduate School of Education’s Useable Knowledge, focuses on the importance of trauma-informed learning environments and identifies helpful strategies.

Learning Arc Question
How can we take action toward more inclusive and sustainable societies?

Jessica Lander, a former Re-imagining Migration fellow, teaches U.S. history to recent immigrants and refugee students at Lowell High School, MA. Following lessons about the history of immigration in the US, Jessica asked her students to write poems about their own migration experiences. This is a small selection of those poems, capturing hopes, dreams, worries and fears.

Learning Arc Question
What is my story of migration and what is yours?

The Politiken article “16 children – 16 photos: Click the black background and switch on their reality” by journalist Peter Jørgensen features photos of refugee children where everything except the child has been blacked out. We ask – what might a photograph convey if time and place are unidentifiable? How do we shift our focus to the stories?

Learning Arc Questions
What are the public stories of migration and how do they influence people’s perspectives and behaviors?

In the first seven months of 2018, thousands of people attempted to reach Europe, seeking international protection and family reunification (UNHCR). When trying to understand migration, it is crucial to consider the factors that prompt people to move. In this short film, Khaled Hosseini explores this question during his visits to refugees in Lebanon in Italy during July 2018.

Learning Arc Question
Why do people leave their homes?

Poetry is a powerful means of learning about the experiences of those who flee their homes and seek refuge. This poem is by JJ Bola, a writer, poet, educator and human rights activist. Bola is a refugee from the Democratic Republic of Congo, which he fled with his parents at the age of 6, to move to London. We recommend using this poem to explore ideas of home and what it means to be a refugee.

How do words and images, disseminated through media, shape the way people respond to migration? How do representations through news media influence public opinion about who migrants and refugees are, along with their needs and rights? In this resource, we provide reflection questions to explore this question with the help of a report, written by media experts in 2017.

On December 10, 2018, Human Rights Day, we commemorated the 70 year anniversary of the Universal Declaration of Human Rights (UDHR). The ideas in the UDHR are all the more relevant in today’s context as we see rising numbers of refugees and displaced peoples. We ask: what are rights? Are people’s rights violated during migration? If so, which ones? What is the role of governments in guaranteeing those rights?

It is important to place human stories at the center of efforts to understand migration. UNHCR, the UN Refugee Agency, aim to do exactly this through videos about refugees who are seeking safety, shelter, new lives and homes. In this classroom resource, we highlight two videos that feature stories of Jewish families welcoming refugees into their homes.

Learning Arc Question
What are the conditions in the new land and how do these shape the experience of migration?

This piece is also available on Share My Lesson as part of their #FamiliesBelongTogether collection: https://sharemylesson.com/todays-news/world-refugee-day-resources

How can we take action toward more inclusive and sustainable societies?