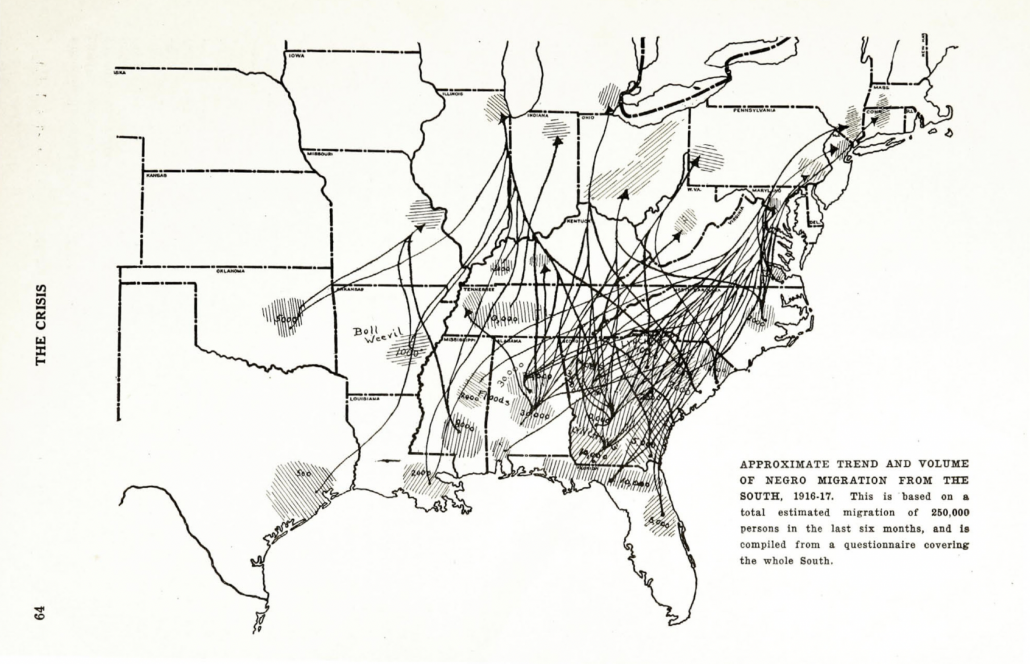 Map documenting the beginning of the Great Migration from the NAAP’s Magazine The Crisis, June 1917

W.E.B. DuBois on the Beginning of the Great Migration

The following is drawn from “Migration of Negros,” a 1917 article written by W.E.B. DuBois. The article was published in   The Crisis in June 2017.  DuBois’s  article captures in real-time, the reactions to the beginning of a massive movement of African Americans out of the South to the North in what would later be called The Great Migration.

Language note: DuBois, a legendary Black civil rights activist, and scholar wrote using the language of his time. The document below is a primary source and therefore we feel it is inappropriate to change his words. Some readers may be need be disturbed by his use of the words “colored” and “negro.”  DuBois article cites men and women, black and white describing what we happening in their own words. If you feel it is appropriate, you might explain the context in which DuBois wrote before sharing the resource with students.

Much has been written of the recent migration of colored people from the South to the North, but there have been very few attempts to give a definite, coherent picture of the whole movement. Aided by the funds of the National Association for the Advancement of Colored People, THE CRISIS has attempted to put into concrete form such knowledge as we have of this movement.

The data at hand are vague and have been collected from a hundred different sources. While the margin of error is large, the actual information which we have gathered is most valuable.

First, as to the number who have migrated to the North, there is wide difference of opinion. Our own conclusion is that about 250,000 colored workmen have come northward. This figure has been builded up from reports like the following which we take from various personal sources and local newspaper accounts…

As to the reasons of the migration, undoubtedly, the immediate cause was economic, and the movement began because of floods in middle Alabama and Mississippi and because the latest devastation of the boll weevil came in these same districts.

The third reason has been outbreaks of mob violence in northern and southwestern Georgia and in western South Carolina.

These have been the three immediate causes, but back of them is, undoubtedly, the general dissatisfaction with the conditions in the South. Individuals have given us the following reasons for migration from certain points…

“The immediate occasion of the migration is, of course, the opportunity in the North, now at last open to us, for industrial betterment. The real causes are the conditions which we have had to bear because there was no escape.”

These conditions he sums up as the destruction of the Negroes’ political rights, the curtailment of his civil rights, the lack of protection of life, liberty and property, low wages, the Jim Crow car, residential and labor segregation laws, poor educational facilities.

From Oklahoma we learn that Negroes are migrating because of threatened segregation laws and mob violence.

A colored man from Georgia states: “In my opinion the strongest factor in this migration is a desire to escape harsh and unfair treatment, to secure a larger degree of personal liberty, better advantages for children, and a living wage.”

The A. M. E. Ministers’ Alliance of Birmingham, Ala., names seven causes for the migration: “Prejudice, disfranchisement, Jim Crow cars, lynching, bad treatment on the farms, the boll weevil, the floods of 1916.”

A colored businessman of North Carolina believes: “There is a silent influence operating in the hearts of the growing class of intelligent Negroes that the insurmountable barriers of caste unnecessarily fetter the opportunities to which every living soul is entitled, namely, a fair chance to earn an honest living and educate his children and be protected by the laws.”

In many sections of Mississippi the boll weevil destroyed the cotton crop; rains and high waters in the spring destroyed other crops.

The centres of this migration have been at Jackson, Hattiesburg, and Meridian, Miss., and many have sacrificed property in order to get away.

A widely-traveled and intelligent colored man writes: “I recently made a trip through the South as far down as New Orleans, La., and I saw hundreds who were making their way northward. When in New Orleans, I learned that there were about 800 in the city from the inland district waiting to go, and who expected to leave during the next week. I went with a friend down where I could meet some of the leaders and talk with them. I met them, and they informed me that they were willing to go anywhere rather than continue to live like they had been. These were heading toward Chicago. I was shocked at the statement made by some of them as to how they lived on those big inland farms, and how badly they were treated by the whites. Many of these men were in overalls. I told them that they were unprepared for the climate; but they were willing to run any risk to get where they might breathe freer. Who blames them?”

Many of the southern whites, through their newspapers, are confirming this general unrest. A white woman says:

“That which a regard for common justice, fair play, human rights could not accomplish, a fear for our bank account is doing, and we are asking: Why is the Negro dissatisfied? What can we do to keep him in the South? We can’t afford to let him go; he means too much for us—financially. He works for little; his upkeep costs us little, for we can house him in any kind of shack, and make him pay us well for that; we do not have to be careful of his living conditions; he is good-natured, long-suffering, and if he should happen to give us trouble we can cope with that and the law will uphold us in anything we do.”

The Columbia, S. C. State asks: “If you thought you might be lynched by mistake, would you remain in South Carolina? Ask yourself that question if you dare.” The Greenville, S. C, Piedmont feels that, “The truth might as well be faced, and the truth is that the treatment of the Negro in the South must change or the South will lose the Negro.”

The Greenville, S. C, News says: “The Abbeville outrage may yet prove more of an economic crime than an offense against the peace and dignity of the state. Where is our labor to come from if not from these people who have lived here beside us for so many generations? Immigration has been a distinct failure in the South; it is expressly declared to be against the policy of South Carolina by our laws.”

It is interesting to note that this migration is apparently a mass movement and not a movement of the leaders. The wave of economic distress and social unrest has pushed past the conservative advice of the Negro preacher, teacher and professional man, and the colored laborers and artisans have determined to find a way for themselves.

For instance, a colored Mississippi preacher says: “The leaders of the race are powerless to prevent his going. They had nothing to do with it, and, indeed, all of them, for obvious reasons, are opposed to the exodus. The movement started without any head from the masses, and such movements are always significant.”

The character of the people who are going varies, of course, but as the Birmingham, Ala., Age-Herald remarks: “…There are, to be sure, many poor Negroes among them who have little more than the clothes on their backs, but others have property and good positions which they are sacrificing in order to get away at the first opportunity. ”

Various reasons are assigned for the migration of Negroes from the South to the North. It was believed for a while that they were lured away by the glowing reports of labor agents who promised high wages, easy work, and better living conditions. But there is something more behind their going, something that lies deeper than a temporary discontent and the wish to try a new environment merely for the sake of a free trip on the railroads. . . . ”

The entire Negro population of the South seems to be deeply affected. The fact that many Negroes who went North without sufficient funds and without clothing to keep them warm have suffered severely and have died in large numbers, has not checked the tide leaving the South. It was expected that the Negroes would come back, sorry that they ever left, but comparatively few have returned. With the approach of warmer weather the number going North will increase.”

How great his migration will eventually prove depends upon a number of things. The entrance of the United States into the war will undoubtedly have some effect. When the war ends it is doubtful if the labor shortage in Europe will allow a very large migration to the United States for a generation or more. This will mean increased demand for colored laborers in the North…

At any rate, we face here a social change among American Negroes of great moment, and one which needs to be watched with intelligent interest.

DuBois’s article speaks to several questions from the Re-Imagining Migration Learning Arc including:

Why do people leave their homes?

What insight does the DuBois article provide into those questions? What else might you need to know to inform your answer? How would you find it?

As you consider the questions above, consider how the Great Migration is similar and different to other migrations in U.S. history. You might try the Same-Different-Gain Project Zero Thinking Routine to structure that reflection.