Emigration vessel — between decks ; Departure of the “Nimrod” and “Athlone” steamers, with emigrants on board, for Liverpool, 1851. 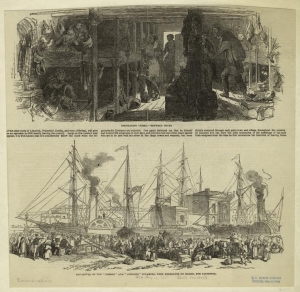 I am going to renew our correspondence and ungenerous should I be if I failed, in doing so, to express the deep regret I feel at being separated from you. Perhaps, this is the only way in which I shall ever again converse with you, perhaps it is, alas. This moment how my heart sinks, and tears start into my eyes.

I am a slave in the land of liberty…. Nothing save death could lull the storm which is raging in my mind. When I took out your prayer book in the chapel today, I thought my heart would break, not because it is weak, but, friendless, deserted and lonely….

I will now give way to some of my adventures. I left Dublin on the 19th Feb. I arrived in Liverpool on the 20th, took out my passage tickets the same day, did not sail for America until 1st March….

Well, I set sail and our ship, the ‘Patrick Henry,’ was resolved to bring us to the South Sea Islands instead of to New York. We had the two first days very fair and rounded the Irish coast like a seagull, the wind followed in our wake for three days on the Atlantic.

The fourth day the Monsters of the deep showed their heads, the Captain said we would have a storm, and truly Boreas spent his rage on us that night. We were tumbled out of our berths, the hold was two feet full of water, a leak was gaining an inch a minute on us, our topsails were carried away, the most of male passengers were all night reliving each other at the pump and in the morning I left my hammock at seven o’clock to look at the terrible sea…

How will I describe a gale on the Atlantic as follows…. At five o’clock p.m. all hands were tuned up close reef sail, not a stitch of canvass to be seen spread, six o’clock wind right ahead, the vessel lying to a rolling from side to side like a heavy log as she was, the passengers quaking with fear.

Ten o’clock, the scene below no light, the hatches nailed down, some praying, some crying some cursing and singing, the wife jawing the husband for bringing her into such danger, everything topsy-turvy, – barrels, boxes, cans, berths, children rolling about with the swaying vessel, now and again might be heard the groan of a dying creature, and continually the deep moaning of the tempest.

The scene above, bare poles, thunder and lightning, the ship almost capsized, lying on her beam, sheets of water drenching her decks, the sea swelling far above her masts, engulfing her around, and huge billows striking her bows and sides with the force and noise of a thousand sledge hammers upon so many anvils.

The ship receding with every wave, sometimes standing perpendicularly on her stern and shaking like a palsied man and then plunging decks and masts under water and raising to renew the same process. She would screech with every stroke of the waves, every bolt in her quaked, every timber writhed, the smallest nail had a cry of its own.

One o’clock in the morning, not a soul on the deck, standing upright, oh mercy one of our masts has gone over the side, bulwarks stoved in, 30 tons of water washing the decks from stem to stern. The Captain is panic struck. Tom Reilly is waiting on the quarter-deck to get into the lifeboat.

The captain speaks, carpenters cut away the broken spars, look out for the next spar, here it comes, The Mizen top is carried away. The ship lurched on her side and lay in a state of distress until daylight.

We had 15 storms one greater than another.

I forgot to tell you, my ship was foundered on a sandbank within two days sail of New York. She ploughed thro six feet of sand. The vessels going to New York generally cross the banks of Newfoundland which are northerly but I kept southerly and therefore passed thro the stream of the Gulf of Florida.

Curious sights are to be seen in the gulf, the phosphoric lights, sparkling like diamonds, the varied colors of the firmament, occasionally a shark, moving majestically thro the water and other different things too numerous to mention.

We had severe weather in the Gulf, yet we were fortunate. An unfortunate vessel from New Orleans bound for Liverpool was struck by lightning. She was laden with cotton, it took fire. Oh, that was an awful sight. Our ship was far in the distance but the Margaret of Newry saved the crew of the burning craft, a great deal of property consumed.

She burned down to her coppers and resembled a pillar of fire all night. Was not that a poor sight on the wide sea. It shocks me even now. Several other affairs happened but how can I relate them here, with a heart bowed down by weight of care. After a voyage of five weeks, we landed in New York….

I would advise no one I have regard for to emigrate unless the persons interested to come have friends before them, who will receive them and snatch them from all the evils of Society. You would hardly believe were I to tell you, all the trials, cheats plots and chicanery of every kind which I had to overcome.

If a man has seven senses, it would take 500 senses largely developed to counteract the sharpers of Liverpool and New York. It would be worth the teaching for a man to come here. The women, (I mean the Irish) are great slaves in this country. Oh the profligacy of some are awful.

I was in the worst company human nature could produce since I left Dublin – robbers, swindlers, pirates, smugglers and swearers and the worst of the lot was an Irishman, but his conduct does not impurely reflect on his countrymen. If it did, what was to become of me?

I found a generous black the other day and I roaming in a wood. He brought me into his boolie (bualtin, Gaelic for little house,) and although I shared his hospitality the smell of him gave me a headache. I had a rifle with me. He fired several shots and did not once miss his aim. I left him alone in his glory and came home.

I wrote to my mother. If she bids me to go home I will go. If not I will wander along the pleasant valleys of the Mississippi, pay a visit to New Orleans, the battlefield of General Jackson, and if I live, return to the land of my birth next spring.

Write and answer quickly – tell me the whole status of affairs and one request I ask of you is to show this letter to my mother….

I now send my devoted aspirations to Mrs. Kelly. My running away without seeing her, whom I prized more than tongue could tell, has caused me many a gloomy hour since we partied. She forgives me. I was not aware my departure would be so sudden.

At all events, I did not wish to see her on the night of the 19th as my nerves were braced and tho’ the tumult within was intense had I gone to her house my iron heart would melt. It was enough for me to see you on the beach, all lonely…

I am going to the mountains, my native element, this afternoon. Send me the United Irishman, or the Nation.

So farewell, the dearest companion of my last years. I sigh to close our long divided conversation. I shall think of you in my hours of melancholy.