The Wagner Rogers Act, Introduced into the Congressional Record on February 8, 1939 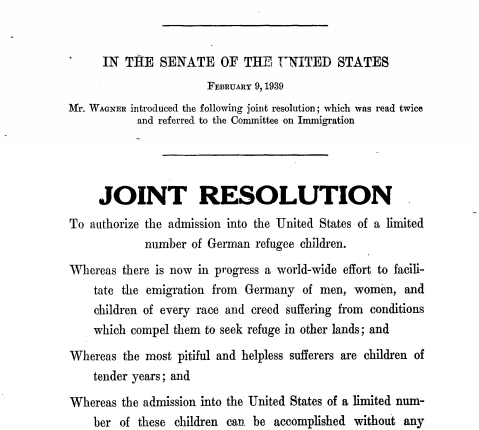 IN THE SENATE OF THE UNITED STATES
February 9, 1939
Mr. Wagner introduced the following joint resolution; which was read twice and referred to the Committee on Immigration

To authorize the admission into the United States of a limited number of German refugee children.

Whereas there is now in progress a world-wide effort to facilitate the emigration from Germany of men, women, and children of every race and creed suffering from conditions, which compel them to seek refuge in other lands; and

Whereas the most pitiful and helpless sufferers are children of tender years; and

Whereas the admission into the United States of a limited number of these children can be accomplished without any danger of their becoming public charges, or dislocating American industry or displacing American labor; and

Whereas such action by the United States would constitute the most immediate and practical contribution by our liberty-loving people to the cause of human freedom, to which we are inseverably bound by our institutions, our history, and our profoundest sentiments: Now, therefore, be it

Resolved by the Senate and House of Representatives of the United States of America in Congress assembled, that not more than ten thousand immigration visas may be issued during each of the calendar years 1939 and 1940, in addition to those authorized by existing law and not-withstanding any provisions of law regarding priorities or preferences, for the admission into the United States of children fourteen years of age or under, who reside, or at any time since January 1, 1933, have resided, in any territory no incorporated in Germany, and who are otherwise eligible: Provided, That satisfactory assurances are given that such children will be supported and properly cared for through the voluntary action of responsible citizens or responsible private organizations of the United States and consequently will not become public charges.

Historical context for this post Teaching Save the Children
Print Page
“Freedom of the Press: Says U.S. Jews Should Take 25,000 Children,” Jewish...