This resource was developed by Miriam Morgenstern.

Introduction: Why do people leave their homes? Look in any social studies textbook and you will see the push and pull factors. Often they look something like this: 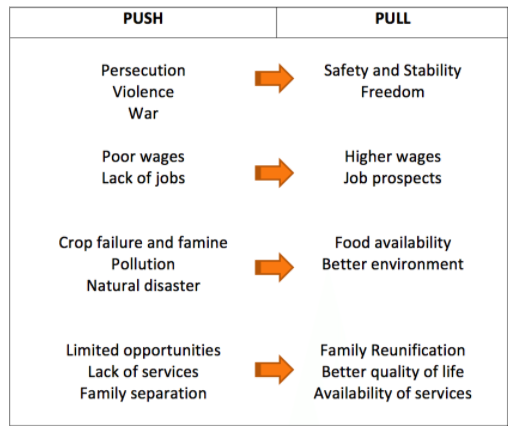 Persecution is described as: Persecution and discrimination based on nationality, race, religion, political beliefs, or membership status in a particular social group[ii] will prompt people to move large distances in search of a safer living location where they can have freedom over their lives.

In discussions about immigration, it is important to enumerate these push and pull factors, and it is even more critical to do this when discussing immigration in a modern context.

→We can ask the question:

Why do people leave their homes?

But if we fail to ask the next question, we are ignoring people who have been historically marginalized, including LGBTQ+ people.

→Let’s make sure we ask the follow-up question:

Who specifically is being persecuted?

→Then take a look at the map below. Find an easier to read version of the map here: 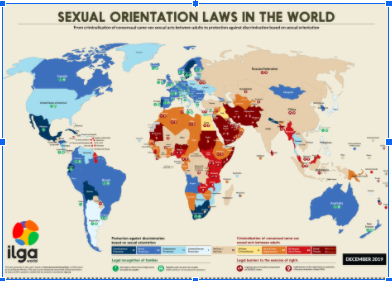 Extension: Choose one country and investigate its specific laws and attitudes towards LGBTQ+ rights and people. The map cannot and does not tell the whole story. For example, while Mexico prohibits discrimination within its Constitution, it is still more difficult for a same-sex couple to marry in certain parts of the country.

→ We want to provide examples of people who left their homes for exactly those reasons.

→Here are some examples and resources you can use when having this discussion:

Subhi Nahas is a refugee from Syria, who made a daring escape from that country, where same-sex romantic relationships are illegal. Subhi was abused by his family because of his sexuality and chose to flee his homeland which was in the midst of a civil war. He became a refugee in Turkey before being allowed to come to the United States. Today he works to help other persecuted LGBT refugees find safe haven. Subhi was the NYC PRIDE Grand Marshal in 2016.

READ: You can read his story here.

WATCH: Subhi Nahas is featured in the full-length documentary film, Unsettled: Seeking Refuge in America. See the trailer below

The film features the stories of four refugees who fled their homelands because of persecution based on their sexuality or gender identity.

Why did Subhi leave his homeland of Syria?

What was his journey like? Did his social class make his journey different from other stories you may have learned about?

Was he safe when he was in Turkey?

How has Subhi adjusted to life in the United States?

How is he using his story to make an impact?

READ: Karolina Lopez is a trans woman from Mexico. Karolina had left home at the age of 10 and when she was 13, she came to the US undocumented, but planning to live with a sister in Arizona. Her sister rejected her because of her gender identity, and eventually Karolina was placed in a detention center for three years. She now works to help other LGBTQ+ immigrants to the United States. She tells her story in a 2019 interview with VICE which you can read here.

Why did Karolina run away from home at a young age?

How did Karolina’s expectations of life in the United States differ from her reality?

Would you say Karolina is safe now?

Karolina states that  “LGBTQ people…are the most vulnerable group in or out of detention centers.” Do you think this is true? Why or why not?

How is Karolina using her story to make an impact?

https://www.glaad.org/vote/topics/immigration The GLAAD website gives an excellent overview of challenges facing immigrants to the United States

https://www.hrc.org/blog/the-precarious-position-of-transgender-immigrants-and-asylum-seekers This HRC website provides information about the plight of trans people who are immigrants to the United States

https://borealisphilanthropy.org/grantmaking/fund-for-trans-generations/ftg-advisory-committee/ Read about Karolina Lopez and other trans activists 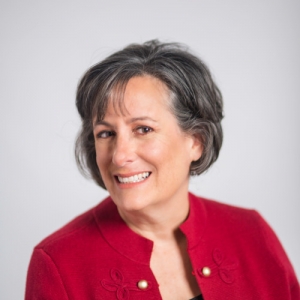 Miriam Morgenstern is an award-winning educator dedicated to supporting teachers and administrators in creating equitable classrooms in which all children can succeed and thrive. She has developed inclusive social studies, ELA, ELL and interdisciplinary curricula that incorporates a pedagogical framework that fosters student-directed learning, while acknowledging the critical role of the classroom teacher.
While a teacher at Lowell High School, Miriam taught within the ELL and social studies departments. There she founded the Public Service and Civic Engagement Academy, created unique electives promoting cultural proficiency through critical analysis and inclusive content, and started international exchange programs for teachers from Cambodia and Germany.

She left the classroom in 2015 to co-found the non-profit organization History UnErased and realize its mission to broaden the K-12 curriculum to include LGBT+ history. In her multiple roles at History UnErased, Miriam co-authored inquiry-based curriculum modules, presented at national conferences and facilitated workshops and seminars for educators from all over the United States. She also wrote several successful grant proposals and managed two contracts with New York City Public Schools.

Miriam currently works as education consultant and remains on the advisory board of History UnErased.