Xenophobia was not always directed solely towards non-white immigrants. The Immigration Restriction League was an anti-immigrant lobbying organization formed by Prescott Farnsworth Hall, Charles Warren, and Robert DeCourcy Ward in 1894. It used eugenics to push for xenophobic policies, campaigning against nonwhite immigrants, like Chinese immigrants, but also against “racially inferior” European immigrants. They gathered data and conducted research to advocate for legislation, publishing their findings in pamphlets and books. Although vetoed multiple times, their campaigns eventually put literacy tests in place as a form of immigration restriction with the Immigration Act of 1917.

The pictures below are some responses to a handout sent out to representatives from various organizations in different states asking about the immigrants they did or did not want, as well as the types of immigration restrictions they would like to see implemented. Many of these organizations were state Granges, generally linked to agriculture. 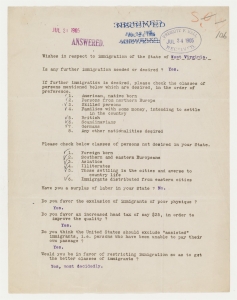 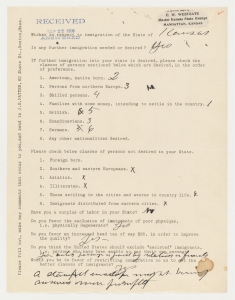