“Give me your tired, your poor, your huddled masses yearning to breathe free…” Emma Lazarus’s “New Colossus,” written in 1883, is perhaps America’s most enduring poem.

Esther Schor, Lazarus’s biographer, has demonstrated the increasing interest in the poem in the past decade: “Give me your tired” yields over 389 million Google hits at this writing. Leaders across the political spectrum, and big city and small town newspapers, regularly draw on Lazarus’s words. Last August, for example, Ken Cuccinelli, acting head of the USCIS, added a new line to the poem—“give me your tired and your poor and those who can stand on their own two feet.” News agencies called upon my organization, the American Jewish Historical Society, the keeper of Lazarus’s papers, to comment. In addition to providing historical context showing Mr. Cuccinelli had misinterpreted Lazarus’s intentions, we had the opportunity to highlight the stunning work of students who had studied Lazarus’s story and had written their own poems about American identity.

We want to bring this curriculum and content to you, in the hope that you’ll inspire your students to engage in the act of civic participation and help craft messages that speak to our times, and the importance of American ideals. Now, more than ever, we need to find our place as civic actors, and to know that our voices count. Now, more than ever, we need the examples from history of those who dealt with complicated situations and pushed their ideals forward through writing. In this program, students will study Emma and her time, using primary sources including the poem itself. Ultimately they will have the opportunity to address the prompt: “If you could write a poem for the Statue of Liberty today, what would it say?”

But before they get on their own pedestals, our curriculum, created with Re-imagining Migration, guides you through the original poem and its context and allows you to get immersed in the history…

Let’s start with the poem:

With conquering limbs astride from land to land

Here at our sea-washed sunset gates shall stand

A mighty woman, with a torch

Whose flame is the imprisoned lightning

And her name Mother of Exiles

Give me your tired, your poor, your huddled masses yearning to breathe free

The wretched refuse of your teeming shore

Send these the tempest-tost to me

I lift my lamp beside the golden door.

Studying the poem prompts the students to ask about its author. All they know is her name, and the date of the poem, 1883. We use the mystery of Lazarus as a point of departure to encourage students to research their questions. Who was she? How did her words make it on to the Statue? Was the Statue always connected to immigration? Was Emma an immigrant? What motivated her to write the poem?

Depending on your time, you could roll this out in a one-day lesson and have the students research their questions by accessing the chapters of this digital storybook or this short film, animated by primary sources. If you have time for a multi-day lesson that delves deeper, you can access the primary sources directly from the file folders. Researching these questions—through annotated primary sources including political cartoons, essays, newspaper articles, photos—leads them to learn not just about Emma, but her world, as she immersed herself in debates about American identity and immigration, urbanization, inequality and antisemitism. Sources allow students to look more closely at Emma’s activism, the changing meaning of the Statue of Liberty over time, immigration and the Chinese Exclusion Act, and how Emma’s neighborhood brought prominent speakers such as Frederick Douglass and Henry George to discuss the pressing issues of the day.

Each source is embedded on our on-line file folders; clicking on the folders yield lesson plans; or teachers may select their own primary sources for the students.

Whether your students spend one day or several on the material, we invite them to write a poem with their own message for the Statue of Liberty, and to enter our national poetry contest.

Thus far, students’  poetry that we’ve shared on a national stage has brought adults to tears and has inspired important conversations. We hope to add to this important body of work!

Emma’s story shows how even in complicated times, people can act. Emma read, debated, listened, and most of all she wrote. She responded to the debates of her time with a poem that has become more resonant with each passing decade. The Emma Lazarus Project aims to show how engagement in history can help students and teachers deal with complexity and multiple perspectives, preparing them to become civically engaged. We hope to awaken interest in the multiple voices of Americans past, to encourage the civic debate of Americans present, and to shape a dynamic, creative and inclusive American future. We invite them to become Emma Lazaruses of the 21st century and to understand that their voice and ideas have the power to shape American identity. 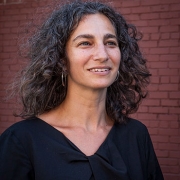 Dr. Annie Polland is the Executive Director of the American Jewish Historical Society. She was formerly the Vice President for Programs & Education at the Lower East Side Tenement Museum, where she oversaw exhibits and interpretation. She is the co-author, with Daniel Soyer, of Emerging Metropolis: New York Jews in the Age of Immigration, winner of the 2012 National Jewish Book Award. She received her Ph.D. in History from Columbia University, and also served as Vice President of Education at the Museum at Eldridge Street, where she wrote Landmark of the Spirit (Yale University). She also teaches at New York University.