Note: This resource was selected for educators to use to teach about the relationship between the Ku Klux Klan’s white supremacist ideas on immigration and the Immigration Act of 1924 (Johnson-Reed Act). To use these resources responsibly, please view our teaching ideas, some of which are included in our teaching suggestions for this resource.

This primary source was culled from the Indiana State Library by historian Jill Weiss Simins.

In an early KKK handbook, called the Kloran, the national organization suggested ten questions that must be answered satisfactorily before “naturalizing” a new member.  Most of them asked about the potential member’s allegiance to the U.S. government and Christian principles with questions such as:

Do you esteem the United States of America and its institutions above any other government, civil, political or ecclesiastical, in the whole world?

The word “ecclesiastical” in this context referenced the Roman Catholic Church. The Klan claimed that Catholic immigrants to the U.S. served the Pope who headed a conspiracy to undermine American values. Thus they were not loyal American citizens. This anti-Catholic sentiment and rhetoric was especially strong in the Midwestern Klan, as seen in the pages of the Fiery Cross. However, not all of the membership questions veiled their hateful message. One question asked potential members bluntly:

Do you believe in and will you faithfully strive for the eternal maintenance of white supremacy?

In their minds, the white supremacy the Klan valued so dearly was presently under attack. Like the earlier Reconstruction Klan, the 1920s Klan viewed African Americans as members of an inferior race. In Indiana, members worried about the mixing of white and black races, especially as young Hoosiers gained access to cars, jazz clubs, and Hollywood movies. In 1922, the Fiery Cross blamed jazz for “inflaming the animal passions of romance-seeking youth.” And in 1924, the newspaper declared, “At this time the whole civilized structure is being threatened by the mixing of the white and black races.”  It continued:

It is God’s purpose that the white man should preserve purity of blood and white supremacy in this country. Those who would have it otherwise or show leniency toward the mixing of white and colored races do not deserve the respect of anyone, much less of those who are trying to preserve American institutions, ideals and principles. A mongrel race and a mongrel civilization mean decay and ruin.

Thus, throughout Klan literature, any reference to Christian virtue or Protestant values should be understood as being imbued with white supremacist ideas. The Klan believed that God valued people of Anglo-Saxon, German, and Scandinavian descent more than people of other backgrounds. And they believed that it was their sacred duty to protect white domination of the U.S. For the Midwestern Klan, the main obstacle to this goal was not African Americans. Many Indiana towns had small numbers of Black residents, and there were plenty of institutionalized practices and laws in place by the 1920s to suppress African Americans. The Klan helped to keep these as standard practice. However, they saw immigrants, mainly Catholics but also Jews, as the main threat to a white, hegemonic, Protestant America. 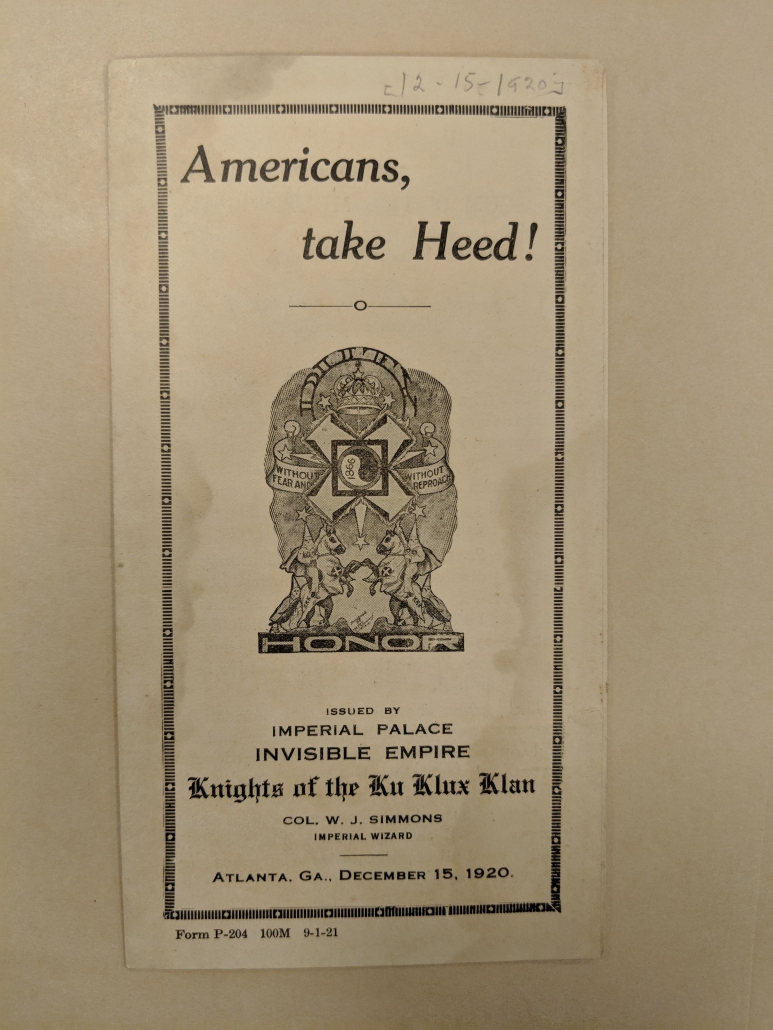 This Klan pamphlet contains a reprinting of the following article:

THE DECLARATION OF INDEPENDENCE, The Constitution and the Gettysburg Address are descendants of the Magna Carta – supreme symbols of Anglo-Saxon souls striving for freedom, justice and humanity. Anglo-Saxons established this nation, wrote its code and sent their sons into the wilderness to gather fresh stars for the flag.

Anglo-Saxon purpose cowed the intervening wastes, discovered world granaries beneath the prairies, scaled the grim western hills and unmasked El Dorado, questioned sullen deserts until they answered with gardens, and finished on the Pacific the great adventure begun at Plymouth Rock.

Then, when the last taunting horizon had been met and vanquished, when axe and rifle had won an empire, when scattered settlements were beaded on threads of steel, and a safe highway through opportunity had been paved in their generous blood, the pioneers, the risk-takers, tossed their port-keys into the ocean and invited all creation to come at leisure and share a “sure thing.”
The making of America is fundamentally an Anglo-Saxon achievement. Anglo-Saxon brains have guided the course of the republic. Our ideals are Anglo-Saxon, our social traditions, our standards of honor, our quality of imagination and our indomitability.

But Anglo-Saxon opinion is a fast diminishing force in national determinations. Strange shoddy has lately crept in the loom on which we weave our destiny; intermarriage is steadily diluting the foundation strain, and if we continue to hold gates and veins wide open, Anglo-Saxon conscience will soon cease to captain our genius.
It would slander a vast body of loyal citizens not to admit the devoted service of all who fought for us, wrought with us, valiantly supported the country in every crisis. Yet, a review of the past fifty years discloses that each successive tide of immigrants has displayed less and less sympathy with our institutions, is more confirmed in its racial solidarity, more resistant to environment and assimilation.

Ominous statistics proclaim the persistent development of a parasite mass within our domain – our political system is clogged with foreign bodies which stubbornly refuse to be absorbed, and means must be found to meet the menace. We have taken unto ourselves a Trojan horse crowded with ignorance, illiteracy and envy. We have Hessionized our essential enterprise until alien workers predominate the basic industries of the country and hold further progress at their regardless mercy.
Provocateurs of revenge and anarchy – opportunists and demagogues – are already forging their strength into a weapon that bodes democracy ill.

ON TO THE MELTING-POT AND CLEAN IT O’ THIS SCUM!

It is essential that students recognize that Americans, Take Heed! was not intended as objective journalism. It was published as a tool to disseminate the Klan’s perspective and promote their racist and xenophobic vision. The questions and activities below are intended to build an understanding of the role the Klan played in the 1920s in shaping attitudes about immigration, encourage reflection on the way that Klan sought to promote their ideas as well as consider why so many people found their racist ideas appealing.

Click here for the 100% American Project Homepage Find additional resources on the 1920s Klan and immigration
Primary Source: The Kloran