The National Academy of Sciences (NAS) is a private, nongovernmental institution established in 1863 by an Act of Congress, signed by President Lincoln. NAS’ mission is to advise the nation on issues related to science and technology. For two years, a NAS panel of 18 distinguished social scientists representing an array of disciplines including sociology, economics, demography, psychology, and anthropology considered whether and how immigrants were integrating into American society. In the fall of 2015, they released an extensive report of their findings covering an array of topics entitled The Integration of Immigrants into American Society.

In an interview Harvard sociologist Mary Waters, the chair of the distinguished NSA panel and the co-author of the resulting report, featured above, shared some of the key findings from the report below:

Carola Suarez-Orozco: Professor Waters could you tell us a little bit about the current population of immigrants in the U.S.? And how do they compare proportionally to the last major wave a century ago (between 1880-1920)?

Mary Waters: Today the 43 million immigrants in the United States represent 13.4 percent of the US population, a percentage slightly lower than it was one hundred years ago. The US-born children of immigrants, the second generation, represent another 37.1 million people, or 12 percent of the population.  Thus, together the first and second generations account for one out of four members of the US population.  An estimated 11.3 million of these immigrants are undocumented. The successful integration of these immigrants and their children is necessary for the overall success of our society.  The well-being of a quarter of our population ought to be one of our highest public policy priorities.  As a society that has successfully integrated generations of immigrants and their children throughout its history, the United States should be a model for societies around the world that face similar challenges in the age of unprecedented human migration

CS-0: How did the NAS Panel define integration? 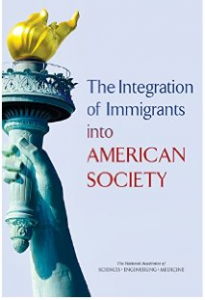 MW: The NAS panel defined integration as the opportunities for immigrants and their descendants to achieve their goals in a society through participation in major social institutions as well as to gain social acceptance. Greater integration implies parity of critical life chances with the native-born American majority. Integration is a two-fold process: it happens both because immigrants experience change once they get here and because native-born Americans change in response to immigration. Yet integration may not always improve the well-being of immigrants and their children.  Convergence with native-born Americans may make immigrants and their children better off, a result that is no doubt a major objective of the immigrants themselves.  But it may also make them worse off.  Many uneducated immigrants see their children achieve a higher level of education than their own.  Yet many immigrants who arrive in very good health see their children’s health deteriorate as they adopt American health behaviors and diets.  The process of integration takes time, and it can be measured in two ways:  for the first generation, by examining what has happened in the time since their arrival; for the second and third generations—the children and grandchildren of immigrants—by comparisons across generations.

CS-0: What can you tell me about how immigrants are integrating into our society?

MW:     After reviewing a wide variety of indicators in the domains of education, occupations, family form, crime, and health, the NAS panel found that current immigrants and their descendants are successfully integrating into US society. When taken as a whole, the facts that today’s immigrants come from different regions of the world and have racial and ethnic backgrounds that differ from those of earlier immigrants have not been insurmountable barriers to integration.

However, this general picture masks important variation between and within groups and across domains. In all five realms, the children of immigrants are integrating—in that they are converging with native-born Americans in outcomes over time.  In a nutshell, we can think of 5 broad domains of outcomes—education; occupation; health, crime; and family formations. In the first two—education and occupation—there are overall improvement in well-being moving from the first to the second generation and beyond. In the other 3 domains, however, the second and third generations have experienced a decline in their well-being compared with that of their parents as they become more like native-born Americans.

CS-0: Can you explain a bit more about educational outcomes?

Overall, the NAS panel concluded that the second generation of all groups was doing well and that the remaining deficits among three Latino second-generation groups (Mexicans, Central Americans, and Dominicans) were primarily due to the very low starting point of their immigrant parents.  All of this data is very positive evidence of rapid educational integration.

CS-0: What about occupational outcomes?

Also, the job situations of the second generation improve in other ways.   Second-generation Mexican men are less likely than their immigrant parents to take jobs in the informal sector, and they are more likely to receive health and retirement benefits through their employment, although not as often as later generation men do. The robust representation of the first and second generations throughout the occupational spectrum implies that the US  workforce increasingly welcomes immigrants and their children into higher-level jobs. This pattern of workforce integration is likely to continue to increase as the baby-boom cohorts complete their retirement over the next two decades.

CS-0: But it is not all rosy, right? It sounds like you are hinting to what some have termed the immigrant paradox—that in some areas, the longer immigrant origin folks are here the worse they do. This was particularly identified in another National Academy of Sciences report in the domain of health nearly 20 years ago—From Generation to Generation: The Health an Well-being of Children in Immigrant Families.

MW: In health, immigrants show better infant, child, and adult outcomes than the US-born population in general and better than US-born members of their ethnic group (Waters and Pineau 2016, 377–89).  Compared with native-born Americans, immigrants are less likely to die from cardiovascular disease and all cancers combined; they also have a lower incidence of all cancers combined, fewer chronic health conditions, lower infant mortality rates, lower rates of obesity, a lower percentage who are overweight, fewer functional limitations, and fewer learning disabilities. Immigrants also have a lower prevalence of depression, the most common mental disorder in the world, and of alcohol abuse. US immigrants live longer, too.  They have a life expectancy of 80.0 years, 3.4 years higher than that of the native-born population.  Across the major ethnic categories (non-Hispanic whites, blacks, Asian/Pacific Islanders, and Hispanics), immigrants have a life expectancy advantage over their native-born counterparts.

Unfortunately, the second generation adopts health behaviors similar to those of other Americans and loses the health advantages their parents had.  For example, second-generation Hispanic and Asian adolescents have shown much higher rates of obesity than the first generation has (Singh, Rodriguez-Lainz, and Kogan 2013).  Children of recent immigrants have encountered weight problems across socioeconomic (SES) status, and this finding was especially so for sons of non-English-speaking parents (Van Hook and Baker 2010).  Rates of smoking and drinking also rise with generations as the rates of children and grandchildren of immigrants converge with those of native-born Americans.

CS-0: The media flames a lot of concerns around criminal immigrants. What did the National Academy of Science uncover in their research?

MW: Immigration is linked to lower crime rates, the opposite of what many Americans fear. Among men between the ages of  18 and 39, the foreign-born are incarcerated at a rate of one-fourth of that of the native-born.  Areas, especially neighborhoods, with greater concentrations of immigrants have much lower rates of crime and violence than comparable nonimmigrant  neighborhoods do. This phenomenon of lower rates of crime and violence for neighborhoods with high concentrations of immigrants is reflected not only across comparable areas but also over time. Immigrants also become integrated into US society in ways that are less welcome.  Although they have much lower levels of crime in the first generation, the second and third generations have crime rates more similar to those of the native-born.

CS-0: It sounds like you are suggesting that in some ways—in regards of health and participation in crime—there may be some negative consequences to acculturation and integration. What about the last outcome the NAS considered—family formation patterns?

MW: Another arena in which well-being declines from the first to the second generation is in family formation patterns that change over time:  their divorce rate and out-of-wedlock birth rates increase while the likelihood of their living in extended families with multiple generations under one roof declines (Waters and Pineau 2016, 358–68).   Among all families headed by first-generation immigrants, children are concentrated in two-parent families in the major racial and ethnic groups, an arrangement that provides them with a number of important contextual advantages. These families are associated with lower risks of poverty, more effective parenting practices, and lower levels of stress. The prevalence of two-parent families continues to be high in the second generation, but the percentage of children in two-parent families declines substantially between the second and third generations, a situation similar to that of other native-born families. Since single-parent families are more likely to be impoverished, this development is a cause for concern.

CS-0: While on balance, the NAS report provided ample reasons to be optimistic about the ways in which immigrants were integrating into American society, the report also provides some cautionary notes. Could you briefly point to them?

MW: The empirical patterns in integration identified by the NAS panel all point to rapid integration into American society—with immigrants coming to share both the positive and negative aspects of that society.  The second generation shows educational and occupation progress, but within a society that is becoming more socioeconomically unequal over time.  The second generation displays differential progress in outcomes that are highly stratified by race.  As immigrants and their children become Americans, they are increasingly stratified by race as well—and share in both the ongoing discrimination and the legal apparatus that attempts to combat that discrimination. But there is one area that the citizen children faces that is specifically tied to immigration—the lasting legacies of the undocumented status of their parents.  The social science research tells us that the children of immigrants are making great strides in integrating into American society.  Legal status remains a pressing and formidable barrier, however, that is tearing families apart and denying human rights to millions of people. As a society, we still have much work to do in these areas.