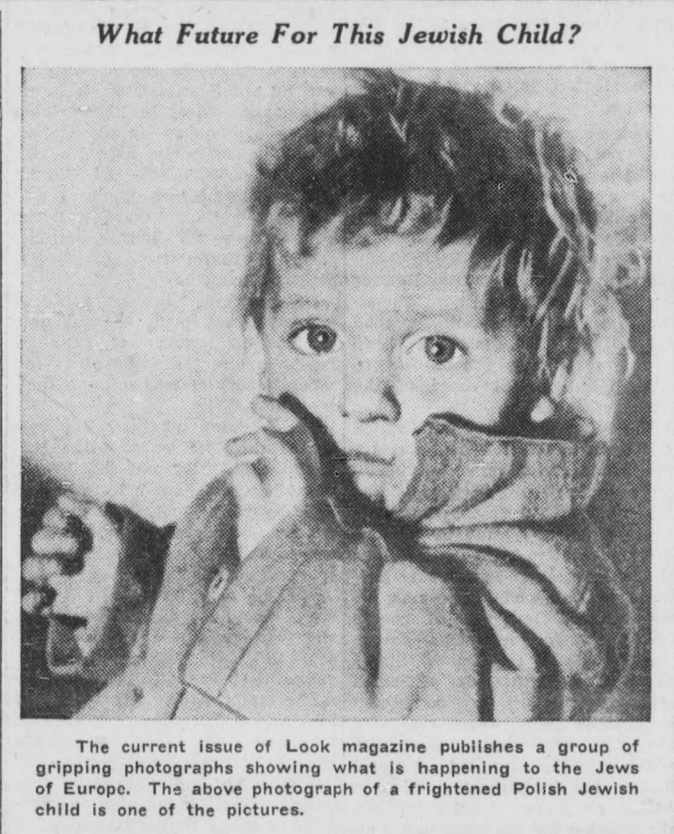 We do not know what the next political step our country will take in regard to the situation created by Nazi inhumanities, but we do know that the heart of our nation goes out to the suffering victims, indignant protests have been voiced, fervent prayers have been offered and now we must turn to the task of immediate relief. Places of refuge must be found for the thousands of Nazi victims.

What about the United States? While President Roosevelt extended the visas of over 12,000 refugees from Germany now in this country, he stated that there was no intention of seeking changes in the existing immigration quotas.

Whatever economic objections and fears of increased unemployment Congress may have with regard to enlarging the existing immigration quota, there can be no such objections to the admission of children.

We are certain that there are thousands of Jewish families in the United States, who, in the face of the present crisis, will gladly take refugee children into their homes and provide them with food and shelter as long as necessary. The organized Jewish communities would guarantee that the children receive the proper care. The admission of these children would not undermine the employment situation in the country as for many years these children would be consumers rather than producers. Their presence in the community would stimulate business.

A movement must be started immediately by our national organizations, if necessary in cooperation with the Red Cross and the Society of Friends, to get Congress to admit to the United States outside of the quota, at least 25,000 German refugee children. A nation-wide campaign, should be organized in every Jewish community to mobilize private homes, each of which should assume the full responsibility for the care of one child. This emergency movement is not to minimize but to supplement the great work of relief and reconstruction of the Joint Distribution Committee, the United Palestine Appeal, the Youth Aliyah, and the German Jewish Children’s Aid, Inc. (A project of the National Council of Jewish Women).

Tens of thousands of innocent children are now exposed to a life of torture or to a slow painful death. The suggested havens in all other countries can care but for a fraction of this number. America must do its share. Let us open our gates to their outstretched hands. American public opinion will approve of it. Let us open our homes to these helpless, suffering boys and girls. The details can be worked out by a special committee for the purpose. But the main issue is urgent and vital and must be undertaken immediately. We must make homes in the United States for 25,000 refugee children.

The public is ready. Are there leaders to organize the task?

Editor’s Note: Any comment from readers will be appreciated.