The Know Nothings were mid 19th-century nativist political movement that viewed Catholics and Immigrants, particularly Irish and German Catholics, as dangers to the freedom and the United States. Know Nothing Politicians organized under several political parties including the Native American Party (which meant U.S. born, not American Indian) and the American Party. Before organizing into a public movement, the Know Nothings started as a secret organization. In fact, the roots of the name Know Nothing was an acknowledgment that when asked about the organization, members were supposed to proclaim that they “know nothing” about it.

The mid 19th century was a time of great change within the United States. Immigration from Ireland and Germany was on the rise. By the 1840s, large numbers of Irish immigrants came to cities in the East Coast fleeing British oppression and the potato famine, later in the decade German immigrants, some, but all of them, Catholic, spread from the cities to the Midwest in the years following the attempted revolutions in what would become Germany and Austria.

At the same time, Chinese immigrants began to arrive on the West Coast during the Gold Rush. Beyond the demographic changes associated with immigration, the U.S. conquered formally Mexican territory at the end of the Mexican-American war. Tensions over the expansion of slavery erupted again and again, during this period, culminating in the outbreak of the civil war. In fact, northern Know Nothings often supported abolition, equating Catholicism with Slavery.

The Know Nothing movement, while short-lived, built upon pre-existing prejudices. Their popularity peaked between 1854-1857. While the movement dissipated, many of the the ideas that the Know Nothings promoted endured and have evolved. It is common, even today, to hear anti-immigrant politicians and policies compared to the Know Nothings.

Below is a newspaper image and short article describing a Know Nothing gathering in New York from 1856.

An advertisement announcing publication of the “American Citizen,” a short-lived nativist newspaper. The broadside is illustrated with an elaborate and venomous anti-Catholic scene. At left a temple of Liberty stands on a mound labeled “Constitution and Laws.” At the foot of the hill is a gathering of native Americans, including sailors, farmers, soldiers, and a Revolutionary War veteran. They hold banners emblazoned with such mottoes as “The Bible The Cornerstone of Liberty,” “Beware of Foreign Influence,” “None But Americans Shall Rule America,” and “Education, Morality, and Religion.” Other banners bear the names of sites of great revolutionary battles. In the background are a harbor with ships and the skyline of a city. In contrast, an unruly contingent of foreigners, mostly Irish, alight from a newly landed ship at right. The ship, “from Cork,” bears the papal coat of arms. The foreigners carry banners reading, “We Are Bound to Carry Out the Pious Intentions of His Holiness the Pope,” “Americans Shant Rule Us!!” and “Fradom of Spache and Action!” Among them are several clerics, a drunken mother with several children, and a few unkempt ruffians. One of the newcomers (lower right) beats a man with a club. In the distance, across the ocean, the basilica of St. Peter’s in Rome is visible. From it issues a giant basilisk wearing the pope’s crown, which is seized by a large hand from above. A commentary is provided in the lengthy continuation of the title: “Already the enemies of our dearest institutions, like the foreign spies in the Trojan horse of old, are within our gates. They are disgorging themselves upon us, at the rate of Hundreds of Thousands Every Year! They aim at nothing short of conquest and supremacy over us.” Below the illustration the text states that the “American Patriot” favors “protection of American Mechanics Against Foreign Pauper Labor. Foreigners having a residence in the country of 21 years before voting, Our present Free School System, and Carrying out the laws of the State, as regards sending back Foreign Paupers and Criminals.” The paper opposes “Papal Agression & Roman Catholicism, Foreigners holding office, Raising Foreign Military Companies in the United States, Nunneries and Jesuits, To being taxed for the support of Foreign paupers millions of dollars yearly To secret Foreign Orders in the U.S.” 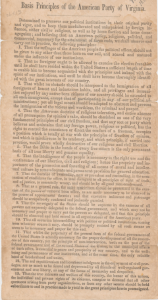 For an additional primary source, consider using an 1856 broadside which outlines the “Basis Principles of the American Party of Virginia.” For a PDF of the document, use this link. The document is courtesy of Duke University Libraries via North Carolina Digital Heritage Center.