Note: This resource was selected for educators to use to teach about the relationship between the Ku Klux Klan’s white supremacist ideas on immigration and the Immigration Act of 1924 (Johnson-Reed Act). To use these resources responsibly, please view our teaching ideas, some of which are included in our Reflection Questions and Teaching Suggestions below.

The primary source was culled from the collection of the Indiana State Library by Historian Jill Weiss Simins.

Throughout the 1920a, the Klan grew their membership in Indiana and across the country. Donning robes and masks, they marched into churches and made donations to grateful ministers. They held picnics and social events. They showed Klan propaganda movies.  Klan bands recorded albums and Indianapolis even had a KKK record store, the American Record Shop. Members advocated for the prohibition of alcohol and supported prayer in school, issues that especially interested women. Thus, the number of women’s Klan groups increased across the state as well.

The image below is from the Klan newspaper, The Fiery Cross. It depicts the funeral of a leader the group Women of the Ku Klux Klan. 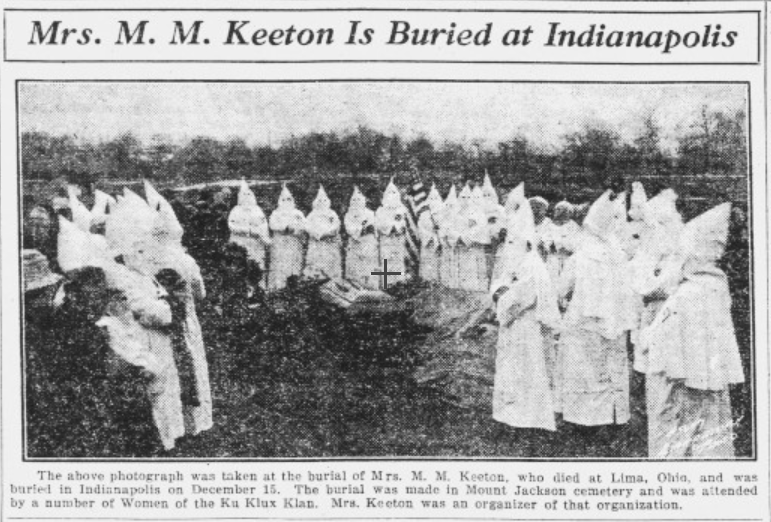 Caption Transcription: The above photograph was taken at the burial of Mrs. M. M. Keeton, who died at Lima, Ohio, and was buried in Indianapolis on December 15. The burial was made in Mount Jackson cemetery and was attended by a number of Women of the Ku Klux Klan. Mrs. Keeton was an organizer of that organization.

It is essential that students recognize that the Klan’s newspaper, the Fiery Cross, was not intended as objective journalism. It was published as a tool to disseminate the Klan’s perspective and promote their racist and xenophobic vision. The questions and activities below are intended to build an understanding of the role the Klan played in the 1920s in shaping attitudes about immigration, encourage reflection on the way that Klan sought to promote their ideas, as well as consider why so many people found their racist ideas appealing.

The source above includes very few words. At the time time, it documented an event and was published with the intent of sending a message. Who do you think was the intended audience for their message? What message were they trying to send?