Note: This resource was selected for educators to use to teach about the relationship between the Ku Klux Klan’s white supremacist ideas on immigration and theImmigration Act of 1924 (Johnson-Reed Act). To use these resources responsibly, please view our teaching ideas, some of which are included in our teaching suggestions for this resource.

It was culled from the collection of the Indiana State Library and was selected by historian Jill Weiss Simins.

From the Introductory essay:

In October 1923, the Fiery Cross claimed 10,000 people turned out for a Klan parade in Bloomington organized by the Monroe County Klan and the Women of the Ku Klux Klan. [23] In November, Klan members held a similar event in Fort Wayne. And the Fiery Cross estimated that 100,000 would attend the night parade of Klansmen in May 1924 in Indianapolis, marching from the State Fairgrounds to Monument Circle led by Klan bands and drum corp. [24]

The Klan grew their membership in other ways too. Donning robes and masks, they marched into churches and made donations to grateful ministers. They held picnics and social events. They showed Klan propaganda movies. [25] Klan bands recorded albums and Indianapolis even had a KKK record store, the American Record Shop. Members advocated for prohibition of alcohol and supported prayer in school, issues that especially interested women. Thus, the number of women’s Klan groups increased across the state as well. [26]

Not all Klan members hid behind costumes. Many felt comfortable taking off their hoods in pictures or running an ad for their business in the Fiery Cross. While some business owners advertised in order to avoid boycott, others proudly proclaimed that their business was “100 per cent American” or incorporated the letters “KKK” into the ad. [27]

These efforts to build membership, influence, visibility, and solidarity were successful in Indiana and across much of the country.

Below is an example of a advertisement that was published in the Fiery Cross. 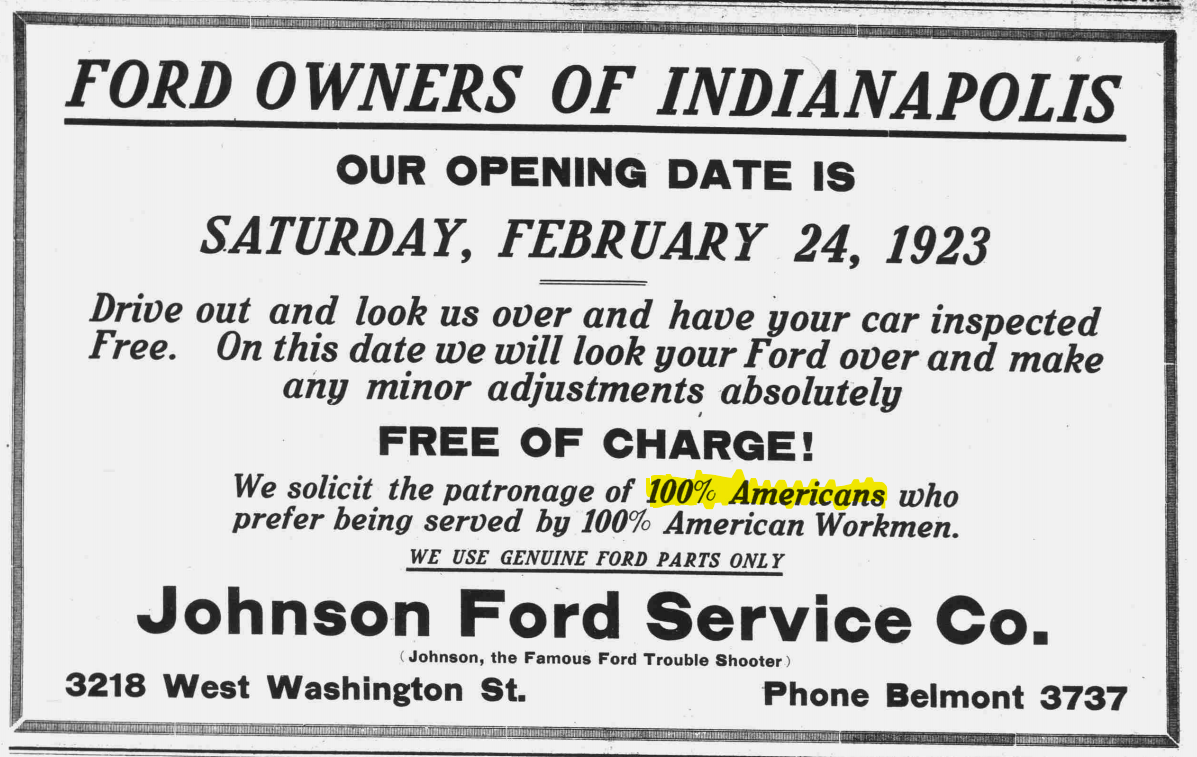 Transcription of Ad: Ford Owners of Indianapolis; Our Opening Date Is Saturday, February 24, 1923; Drive out and look us over and have your car inspected Free. On this date we will look your Ford over and make any minor adjustments absolutely Free of Charge! We solicit the patronage of 100% Americans who prefer being served by 100% American Workmen. We Use Genuine Ford Parts Only; Johnson Ford Service Co.; (Johnson, the Famous Ford Trouble Shooter); 3218 West Washington St.; Phone Belmont 3737

It is essential that students recognize that the Klan’s newspaper, The Fiery Cross, was not intended as objective journalism. It was published as a tool to disseminate the Klan’s perspective and promote their racist and xenophobic vision. The questions and activities below are intended to build an understanding of the role the Klan played in the 1920s in shaping attitudes about immigration, encourage reflection on the way that Klan sought to promote their ideas as well as consider why so many people found their racist ideas appealing.

Primary Source: Political Cartoon, “Whose U.S. Is This Anyway?”