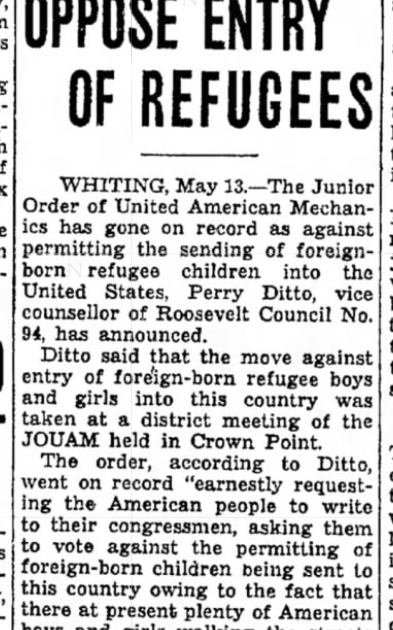 WHITING, May 13. – The Junior Order of United American Mechanics has gone on record as against permitting the sending of foreign-born refugee children into the United States, Perry Ditto, vice counselor of Roosevelt Council No. 94, has announced.

Ditto said that the move against entry of foreign-born refugee boys and girls into this country was taken at a district meeting of the JOUAM held in Crown Point.

The order, according to Ditto, went on record “earnestly requesting the American people to write to their congressmen, asking them to vote against the permitting of foreign-born children being sent to this country owing to the fact that there [are] at present plenty of American boys and girls walking the streets seeking employment.”

Statement of Hon. Edith Norse Rogers, Representative from Massachusetts, May...