Mary Tape and her husband Joseph were successful immigrants from China. Joseph served as a translator for the Chinese consul in San Francisco and Mary was a photographer and artist. Their daughter, Mamie, was born in the United States and, the Tate’s argued, had the right to attend a public school. 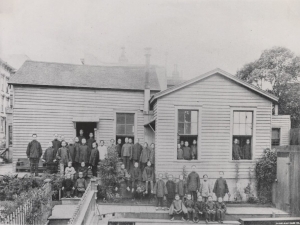 San Fransico had operated a segregated, but public, school for children of Chinese parents, however, the city cut public funding for the school in 1871, forcing parents to find other means of educating their children. The Tate’s thought that was unfair and sued the city for the right to public education and won. However, the victory came at a cost. In order to prevent Chinese children from attending public school with white students, they set up a new school for children of Asian ancestry.

Mary Tate was outraged. Below is a letter she wrote to the Board of Education in protest.

Note: We have edited the letter for clarity.

To the Board of Education—Dear Sirs:

I see that you are going to make all sorts of excuses to keep my child out of the Public schools. Dear sirs, Will you please to tell me! Is it a disgrace to be born  Chinese? Didn’t God make us all!!! What right have you to bar my children out of the school because she is a Chinese descent. There is no other worldly reason that you could keep her out, except that. I suppose, you all go to churches on Sundays! Do you call it a Christian act to compell my little children to go so far to a school that is made in purpose for [just for] them. My children don’t dress like the other Chinese. They look just as funny amongst them [Chinese origin students] as the Chinese in Chinese [traditional] dress look amongst you Caucasians. Besides, if I had any wish to send them to a Chinese school I could have sent them two years ago without going to all this trouble. You have expended a lot of the public money foolishly, all because of a one poor little child. Her playmates are all caucasians ever since she could toddle around. If she is good enough to play with them, then is she not good enough to be in the same room and studie with them? You had better come and see for yourselves. See if the Tape’s are not same as other caucasians, except in features. It seems no matter how a Chinese may live and dress so long as you know they are Chinese, then they are hated as one. There is not any right or justice for them.

You have seen my husband and child. You told him it wasn’t Mamie Tape you object to. If it were not Mamie Tape you object to, then why didn’t you let her attend the school nearest her home! Instead of first making one pretense then another pretense of some kind to keep her out? It seems to me Mr. Moulder has a grudge against this eight-year-old Mamie Tape. I know they are no other child, I mean Chinese child,  [that] cares to go to your public Chinese school. May you Mr. Moulder, never be persecuted like the way you have persecuted little Mamie Tape. Mamie Tape will never attend any of the Chinese schools of your making! Never!!! I will let the world see, sir, what justice there is when it is governed by the race prejudice [of] men! Just because she is of the Chinese descent, not because she doesn’t’t dress like  you, because she does – just because she is descended of Chinese parents. I guess she is more of a American then a good many of you that is going to prevent her being educated.