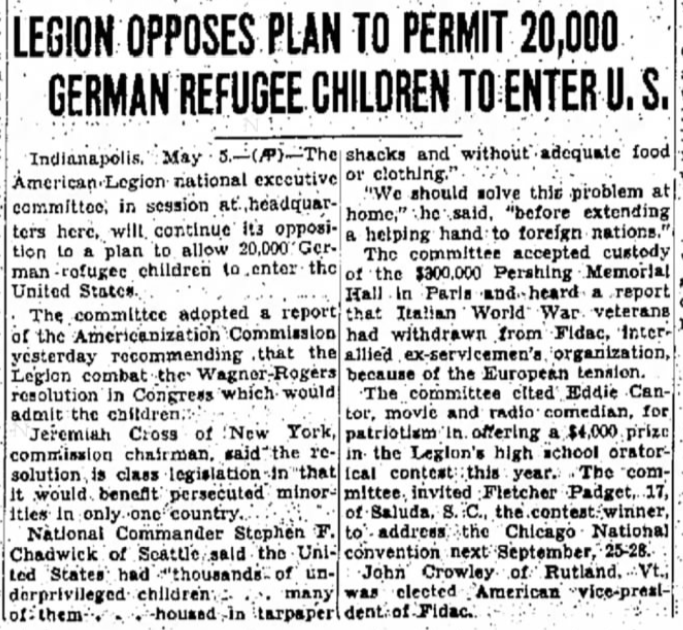 Indianapolis, May 5. – (AP) – The American Legion national executive committee, in session at headquarters here, will continue its opposition to a plan to allow 20,000 German refugee children to enter the United States.

The committee adopted a report of the Americanization Commission yesterday recommending that the Legion combat the Wagner-Rogers resolution in Congress which would admit the children.

Jeremiah Cross of New York, commission chairman, said the resolution is class legislation in that it would benefit persecuted minorities in only one country.

National Commander Stephen F. Chadwick of Seattle said the United States had “thousands of underprivileged children . . . many of them . . . housed in tarpaper shacks and without adequate food or clothing.”

“We should solve this problem at home,” he said, “before extending a helping hand to foreign nations.”

The committee accepted custody of the $300,000 Pershing Memorial Hall in Paris and heard a report that Italian World War veterans had withdrawn from Fidac, inter-allied ex-servicemen’s organization because of the European tension.

The committee cited Eddie Cantor, movie and radio comedian, for patriotism in offering a $4,000 prize in the Legion’s high school oratorical contest this year. The committee invited Fletcher Padget, 17, of Saluda, S. C., the contest winner, to address the Chicago National convention next September, 25-28.

Historical context for this post Teaching Save the Children
Print Page
Statement of Clarence E. Pickett, Acting Executive Director of the Nonsectarian...