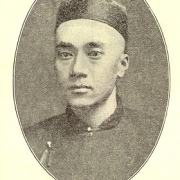 Lee Chew’s reflections on his life in the United States were originally published in the New York-based Independent Magazine in 1903.

Chew immigrated from China as a teenager. After arriving in the U.S, he found work as a domestic servant for an American family in San Francisco and later started a laundry business with a partner. Chew eventually moved to New York where he operated an importing business. In the excerpt below, Lee Chew reflects on the anti-Chinese attitudes of people in the United States.

When I got to San Francisco, . . . [a] man got me work as a house servant in an American family, and my start was the same as that of almost all the Chinese in this country….

…When I first opened a laundry it was in company with a partner.… We had to put up with many insults and some frauds, as men would come in and claim parcels that did not belong to them, saying they had lost their tickets, and would fight if they did not get what they asked for. Sometimes we were taken before Magistrates and fined for losing shirts that we had never seen. On the other hand, we were making money, and even after sending home $3 a week, I was able to save about $15. When the railroad construction gang moved on we went with them. The men were rough and prejudiced against us, but not more so than in the big Eastern cities. It is only lately in New York that the Chinese have been able to discontinue putting wire screens in front of their windows, and at the present time the street boys are still breaking the windows of Chinese laundries all over the city, while the police seem to think it a joke.

… Some fault is found with us for sticking to our old customs here, especially in the matter of clothes, but the reason is that we find American clothes much inferior, so far as comfort and warmth go. The Chinaman’s coat for the winter is very durable, very light and very warm. It is easy and not in the way. If he wants to work he slips out of it in a moment and can put it on again as quickly. Our shoes and hats also are better, we think, for our purposes, than the American clothes. Most of us have tried the American clothes, and they make us feel as if we were in the stocks.
. . . Americans are not all bad, nor are they wicked wizards. Still, they have their faults, and their treatment of us is outrageous.

The reason why so many Chinese go into the laundry business in this country is because it requires little capital and is one of the few opportunities that are open. Men of other nationalities who are jealous of the Chinese,…[they] have raised such a great outcry about Chinese cheap labor that they have shut him out of working on farms or in factories or building railroads or making streets or digging sewers. He cannot practice any trade, and his opportunities to do business are limited to his own countrymen. So he opens a laundry when he quits domestic service.
The treatment of the Chinese in this country is all wrong and mean. It is persisted in merely because China is not a fighting nation. The Americans would not dare to treat Germans, English, Italians or even Japanese as they treat the Chinese, because if they did there would be a war.

There is no reason for the prejudice against the Chinese. The cheap labor cry was always a falsehood. Their labor was never cheap, and is not cheap now. It has always commanded the highest market price. But the trouble is that the Chinese are such excellent and faithful workers that bosses will have no others when they can get them.
…It was the jealousy of laboring men of other nationalities — especially the Irish—that raised all the outcry against the Chinese….Chinese were persecuted, not for their vices, but for their virtues. There never was any honesty in the pretended fear of leprosy or in the cheap labor scare, and the persecution continues still, because Americans make a mere practice of loving justice. They are all for money making, and they want to be on the strongest side always. They treat you as a friend while you are prosperous, but if you have a misfortune they don’t know you….
…More than half the Chinese in this country would become citizens if allowed to do so, and would be patriotic Americans. But how can they make this country their home as matters now are! They are not allowed to bring wives here from China, and if they marry American women there is a great outcry.