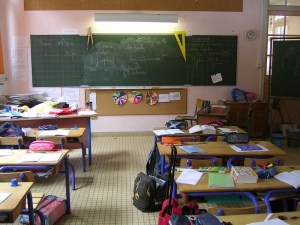 Arabic has become the most spoken foreign language in France, but it is only taught in a few public schools. Most public schools focus on teaching English, German, and Spanish. Out of necessity, mosques and private institutions have begun to provide the resources to immigrant-origin children that the public schools have not been able to.

Now, the government is debating whether to take control of Arabic education. The current government believes it is better to teach Arabic in secular schools than in local mosques. The education minister, “says he wants to give Arabic ‘prestige,’ as it is ‘a great literary language.” They are reaffirming the importance of immigrant needs and their connections with family. But the debate on where to teach Arabic in France is not a simple one. Some believe that the decision seems to be coming from an interest in national security rather than on immigrant-origin students’ rights and needs. The New York Times article, “France Debates Where to Teach Arabic: Public Schools or Local Mosques,” addresses the complexities of the political debate regarding a foreign language that has undeniably become local.

Early on Sunday mornings, Habiba Hatem, 9, prepares her own breakfast, grabs her flashy pink school bag and jumps into her father’s car — bound for Arabic lessons at her local mosque in a suburb north of Paris.

Colorful sketches of how to perform ritual washings decorate the walls of the classroom, along with drawings of butterflies, cars and carrots, with their Arabic names underneath.

“Today we are going to do a dialogue about ‘duyuf’ coming for dinner,” the teacher tells Habiba and a dozen other boys and girls ages 9 to 17, all born in France. “Duyuf means guests,” she says, writing the word on the blackboard.

Habiba’s grandparents came from Tunisia in the 1960s, and her father believes it is important that his child stays connected to her roots.

But the public school she attends does not offer Arabic classes, so she makes the weekly trip to the mosque in Romainville, a part of the Seine-Saint-Denis department north of Paris, which is home to a large immigrant community.

The Hatem family’s situation is a common one in France.

You can access the article, “France Debates Where to Teach Arabic: Public Schools or Local Mosques,” here.