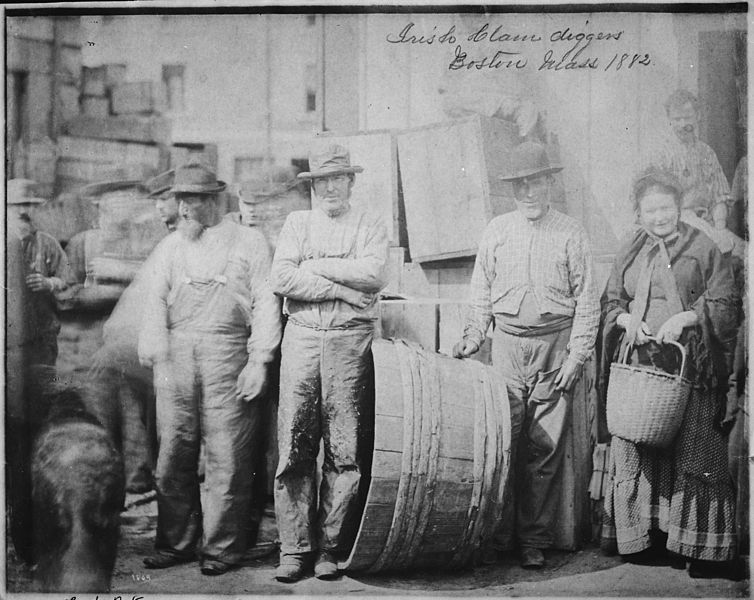 Irish clam diggers pose on a Boston wharf in 1882. While being a few decades after the Curtis family exchanged letters, it is presumed that the circumstances of these immigrants were similar to that of those in Pennsylvania.

Today families that are spread across continents use Skype, Whatsapp, Viber, and countless other mediums to maintain a connection even when physically apart. But what did immigrant families of the past use to keep in touch with their relatives back home? Handwritten letters served as the perfect vehicle to exchange stories of fear and opportunity between newly arrived immigrants and those who remained in their homeland. A look at the mid-1800s reveals letters written between mothers, sisters, brothers, uncles, and cousins of the Curtis family, spread across Ireland and Pennsylvania. These letters tell the stories of hardship and famine alongside opportunity and strength, as a family strives to maintain its connections from thousands of miles away. But most importantly, these letters expose the everyday struggles of immigrant families, to share news of home, financial stability, and opportunity for success across borders – struggles all too familiar to the immigrants of today.

Before taking a look at the Curtis family letters, we must gain some insight regarding the context in which they lived, both in Ireland and in Philadelphia. Mid 19th century Ireland faced dire circumstances, as a North American fungus destroyed Irish potato crops. The crisis was more than a crop failure, it revealed the social, economic, and political oppression of Irish Catholics in what is known as the Irish potato famine. Years before the famine, Britain’s discriminatory colonial policies allowed for “confiscation and transfer of lands to British colonizers” (Takaki, 133) and other policies that left the Irish with few choices as starvation led to massive numbers of deaths across the island. In A Different Mirror, Ronald Takaki explains that the situation led many to leave their homeland to start new lives.

“By the thousands, Irish were leaving for America, where there was ‘room for all – employment for all and success for many.’ Letters from friends and family in the United States glowingly described riches ‘growing like grass’ and the boundlessness of a country where there was no tyranny or oppression from landlords. Between 1815 and 1845, one million Irish came to America” (134).

When the Potato blight hit in 1845, the exodus sped up. In the 10 years between 1845-1855, one million Irish traveled aboard what was known as coffin ships to the U.S., desperate to make it to the promised land. During this period, the Irish population in cities across the Northeast, including Boston, New York, and Philadelphia, grew rapidly, leading the number of Irish to exceed that of all other immigrant groups. According to the Historical Society of Pennsylvania, “fueling anti-Irish attitudes was the view that the Irish were a nonwhite, racially inferior group, a view informed by existing British attitudes that saw Irish physical and social attributes as dangerous and subhuman.” The perception of the Irish as both inferior and a threat culminated in the Irish once again being oppressed, as they were famously excluded from the job market with signs reading “No Irish Need Apply.”

A sign common amongst xenophobic businesses, these words appear on an 1862 song sheet from Philadelphia. Singer and songwriter Kathleen O’Neil uses this song to react to seeing such signs in a land once promised to her as the “Home of Liberty.”

To read more about the context the Curtis family found themselves within click here.

Now with an insight into the context in which Irish-Americans found themselves, read an exchange from November 1845 between Hannah Curtis and her brother, John Curtis, to gain a first-hand account of the destructive effects of the Great Famine:

As you read this letter, consider the following questions.

While Hannah Curtis writes from a pre-exodus perspective, just one year later in April of 1846 William Dunne writes his nephew John Curtis to describe the mass exodus itself and the demolition of Ireland that catalyzed it.

Take a look at this letter to explore the creation of immigrant enclaves and networks.