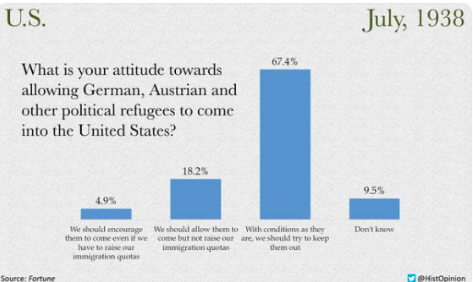 Support for admitting refugees from Nazi Germany into the US was very low in 1938.

WASHINGTON, D. C. It is upon a hazardous journey that the officers of the Intergovernmental Committee on Refugees embark when they sail from unnamed Europe ports this week. To reach these shores, they have to dodge Nazi submarines and air fleets, and after they arrive they will be faced with as tangled and ticklish a problem as any group of statesmen would care to encounter. For it is an awful fact that there is no nation on earth, at the moment, which will open its doors in humanity to the hundreds of thousands who have been driven from their homes and homelands, and who now finds this big earth too small to shelter them.

This is the first problem of the officers of the committee—where is there one land where compassion and pity are not dead ?

The meeting in Washington will open October 16 at the White House, and on that day, according to the plans of the State Department, President Roosevelt will address them. What he says will shape the destiny of this committee, and in turn of all the homeless of Europe. Facing the President around a table will be such men as Myron C. Taylor, the former steel king, now, in the warm afternoon of his life, devoting his energies to humanity; Paul van Zeeland, the former Belgian Premier; Lord Winterton, the committee chairman; and Sir Robert Emerson, the dynamo of a man who is the committee’s director. The President will speak, and they will listen.

And there is one thing he is almost certain to say: “Find a country with a heart!’’

After that is done, there are ways of settling the refugees in new homes. True, it will be difficult. It will require funds and tact and a powerful, driving will. But it can be done—if that country is found.

When Lord Winterton arrives, he will stay for a few days with Mr. Taylor at his Long Island estate. Sir Herbert will come straight to Washington, and in all likelihood will be the guest of Robert Pell, the State Department’s technical adviser on refugee problems. Van Zeeland will also come to Washington.

In New York, Lord Winterton will meet the leaders of Jewish and Gentile organizations peculiarly interested in refugee problems.

Speaking of refugees, Senator Bob Reynolds, of North Carolina, who sees the overthrow of the republic if 20,000 refugee children are allowed to enter this country in the space of two years, has just opened a new headquarters for his organization, The Vindicators, here in Washington. It’s right behind the Supreme Court Building, and cost $20,000.

“We received a radiogram from Berlin on the 21st, as did several others here who are promoting Americanism. It was signed by Orville Good and reads: “If you want world peace, oppose any change of your neutrality law. Fight off British propaganda and subversive influence.’ ’’