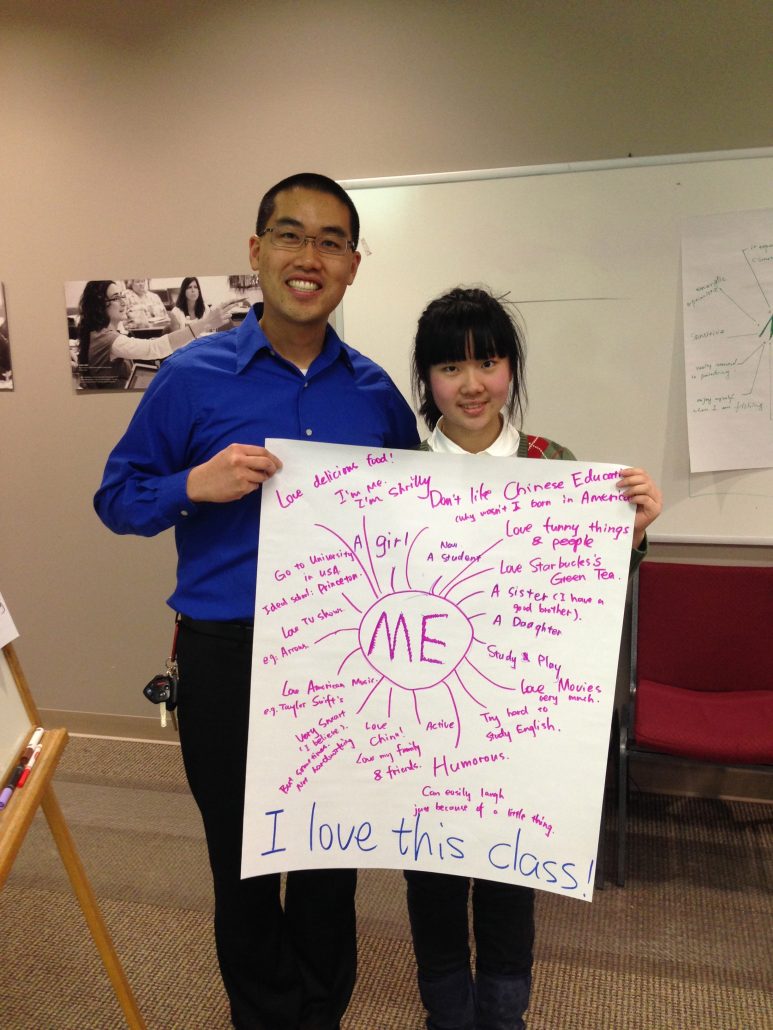 Brian Fong and a Facing History and Ourselves student from China

Brian Fong is the kind of colleague you dream about. He is kind, considerate, and full of ideas. He is also the kind of teacher who has bookshelves and files full of great resources for teaching just about any subject. I used to work with Brian at Facing History and Ourselves where we found ourselves swapping resources and ideas for teaching about immigration again and again. I am thrilled that he has agreed to share some of his wisdom with you.

Adam S: Hi Brian. Can you tell us something about your identity as an educator? What brought you to teaching? And, what has sustained your work in education?

Brian F.: My family members were all immigrants. Grandparents, aunts, uncles, great-grandparents etc. were all immigrants from China and I was the first child born on U.S. soil and I grew up in San Francisco’s Chinatown. My community was small, six blocks in downtown San Francisco and I grew up over a fortune cookie factory. I laughed, ate, slept, and cried in Chinese. Having rarely ventured out beyond my community and seeing people who did not look or sound like me, it came as a shock to me when I had to go to school and could not understand English. I had no idea what was going on and that’s when I learned what it meant to be an English Language Learner. I became an educator because one elementary school teacher decided to keep me in her classroom with the other students who could speak English instead of allowing me to be pulled out all the time for ESL support. She believed that with careful guidance and support in an English immersion classroom, I could pick up the language faster and she was right! My teacher gave me a chance to achieve and I became a teacher to be that advocate for other students.

I laughed, ate, slept, and cried in Chinese. Having rarely ventured out beyond my community and seeing people who did not look or sound like me, it came as a shock to me when I had to go to school and could not understand English. I had no idea what was going on and that’s when I learned what it meant to be an English Language Learner.

Adam S: She sounds like a wonderful teacher who recognized your strengths.

Both you and I have spend a lot of time thinking about how to place immigration stories in a historical context. At the same time, you’ve collected a number of literary resources about immigration. Can you share some of your favorite immigration-related books for younger students?

Brian F.: As a father of a 4-year-old, I have been hunting for as many books as possible that will teach him about the immigrant experience. Many of the elementary teachers I support have shared many valuable books and resource lists. I am working my way through the Children’s book list from Bridging Refugee Youth and Children’s Services. We’re currently reading Let’s Go See Papa! By Lawrence Schimel. This children’s book is a story from a young child’s perspective about what it’s like to have an absent parent and to have to leave your home, country and those you love for a new life.

Adam S: The Bridging Refugee Youth and Children’s Services list is terrific. Thanks for that recommendation. I have some reading to do.

Thinking back to your childhood, how did you first get into reading?

Brian F: I loved to read in school, it was how I learned English. My fourth-grade teacher had a lot of picture books and graphic novels, mostly Disney books like Uncle Scrooge or Charlie Brown and the Peanuts gang type of books. The images helped me understand the words on the page and without comic books or graphic novels, I probably would not have loved reading as much as I do now.

Adam S. It’s interesting that those are the books you mention. I remember talking to you about the role that comic books played in your life. My son devours comic books and has for years. A few years ago I decided to read of few of them to see what he was learning and immediately fell in love with the new Ms. Marvel series. For those that haven’t read it, the new Ms. Marvel is the daughter of Pakistani immigrants living in New Jersey.

Beyond comic books, what are some of your favorite books about immigration for middle and high school students?

Brian F: As a history teacher, my favorite graphic novel is The Four Immigrants Manga. It’s a “documentary comic book” from 1931, depicting the true adventures of four young Japanese men in America. The story is marked by the dates 1904 and 1924, starting with their arrival in the United States and ending in 1924 as the immigration laws stiffened and some of the protagonists elected to return to Japan. This collection of 52 newspaper strip cartoons is an amazing primary source to teach about the immigrant experience.

Immigrant stories are not just about teaching the history, but also about providing windows into the lives of others and also mirrors that reflect the shared human experiences of finding belonging.

I’m currently reading another graphic novel memoir The Best We Could Do by Thi Bui. It’s a comprehensive story as Bui documents the story of her family’s daring escape after the fall of South Vietnam in the 1970s, and the difficulties they faced building new lives for themselves in the United States. Immigrant stories are not just about teaching the history, but also about providing windows into the lives of others and also mirrors that reflect the shared human experiences of finding belonging.

Adam S: You gave me The Four Immigrants Manga!  I love that book. Did you know that it has been turned into a musical? I also was really touched by The Best We Could Do. I read it in one sitting. The art and the storytelling are both outstanding.

I know you have led several Facing History and Ourselves workshops on immigration, and I believe you are about to lead another one when you finish this exchange. What are some of the key questions you ask? And, what are the resources and stories you just have to use?

Brian F: There are two main questions that I have returned to when teaching about migration: Who Belongs? Who Decides Who Belongs? Immigration and movement is a universal human experience but not all immigration experiences are the same. When I think about teaching the immigration movements, I make it a point to think about what immigration around the world looks like, such as someone moving from Syria to Germany as a refugee or from China to Japan. Comparing how various nations and communities globally perceive immigrants provides insight into how one’s local community perceives immigrants.

Words Without Borders recently showcased five comics depicting immigrant and refugee stories from around the world which helps provide additional perspectives on thinking about who belongs and who decides who belongs.

Adam S.: Thanks, Brian. Thinking about both the similarities and differences between migration experiences is essential. There is no single migration experience. That’s why I find your emphasis on the global perspective is so important. I think we can learn a lot but putting today’s stories within a historical/chronological perspective as well. As we look at migration stories across time, we should explore what is familiar and what we can learn from the differences.

Thanks for your time and good luck with your next workshop. It is always a pleasure working and learning with you. 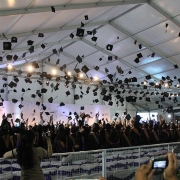 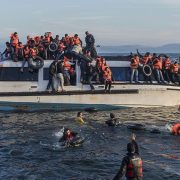