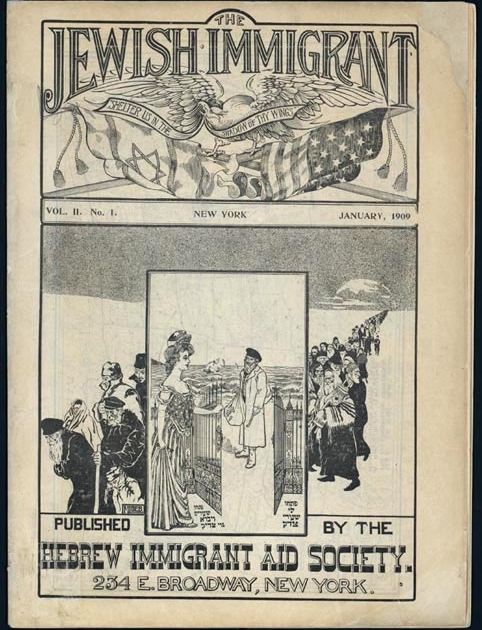 Jewish immigrants first arrived in North America in the 17th century, before the United States was the United States. However, it wasn’t until the second half of the 19th century, particularly after 1880, was there a large, distinct Jewish presence in the United States. After 1848, many German Jews came to the United States and began to integrate into American life. Despite, or maybe because of their integration, anti-semitism began to rise in the following decades. By the 1880s, Jews, many of whom felt that they were accepted in the new world, began to face discrimination including being denied service at hotels and other places of leisure including sections of the beach at Coney Island.

Another factor was a new wave of Jewish immigration. Between 1880 and 1920 over two and a half million Jewish immigrants came to the country. the overwhelming majority of these new Jewish immigrants were from Eastern European countries under Russian control or influence. While there was a revival of Jewish intellectual life in Eastern Europe at the time, many of those city dwellers stayed in Europe, those coming to the U.S. were often quite poor and fleeing persecution and violence.

Despite rising anti-semitism, many saw hope in the United States.  A Jewish folksong from the time captured the promise of a new life across the ocean. The lyrics noted:

As the Russians, mercilessly

Took revenge on us.

There is a land, America

Where everyone lives free.

(As quoted in A Different Mirror: A History of Multicultural America by Ronald Takaki)

The reality is that life was not easy in the United States either. Many Eastern European Jewish immigrants found their homes in run-down tenements in neighborhoods alongside other recent immigrants, particularly Italians. Their stories are eloquently captured in the literature of the time, including the in work of Anzia Yezierska. A free copy of her book Hungry Hearts can be downloaded here from Project Gutenberg.

However, life in the U.S. was often preferable to the extreme hardships of life under the Russian Czar. The short film we created to accompany Immigration and Identity: Jewish Immigrants and the Bintel Brief is a useful piece to use with students to provide a historical background for this lesson.

Lesson Overview: This lesson introduces images and artifacts, created by late 19th century and early 20th Jewish immigrants to the United States that celebrated the opportunities for Jewish immigrants in the U.S. and encourage fellow Jews in Eastern Europe to emigrate. These images are contrasted with an anti-Semitic cartoon from the same period.

Some Jewish immigrants encouraged others to join them in the United States. Their sentiments were expressed in letters and postcards that they sent to relatives, in music, and in information booklets produced to educate those considering making the journey to the United States. Below are three images that can be viewed as a whole class, or at tables. We encourage structuring the viewing project with this simple three-step routine:

Note: all images in this lesson were made available through the Library of Congress. LOC.gov

A Jewish New Years Card Printed in This postcard from 1909 features a drawing by Jacob Keller depicting Jewish immigration to America. On the right (east) is a group of traditionally dressed Jews carrying their meager possessions while the symbol of czarist Russia hovers above. The richly dressed, smiling Jews of the west welcome their eastern brethren as does the Statue of Liberty. Overhead, a bald eagle carries a ribbon with a Hebrew quote from Psalms 17:8 – “and shelter us in the shadow of Your wings”. Printed by the Hebrew Publishing Company, the Folklore Research Center, Hebrew University of Jerusalem

After pairs or groups report on the interpretations of their image, consider the motivations of those that created them.

As an extension, use the same protocol to examine this anti-Semitic cartoon from 1909, approximately the same time as the other images were created.  Please review it to decide whether you believe the image is appropriate for your students.

Anti-semitic cartoon published in a U.S. newspaper in 190

Wrap up: To conclude the lesson consider using this routine to help students connect what they have explored with their own experiences and the experiences of others. 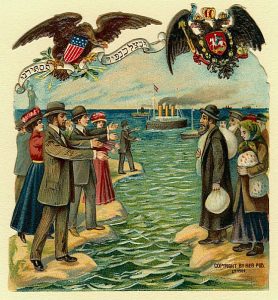 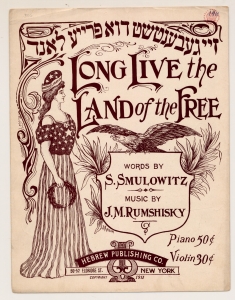 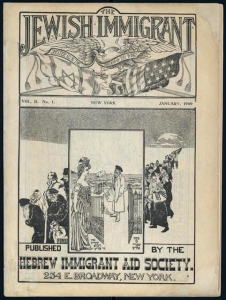 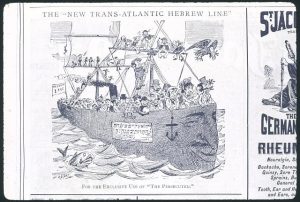