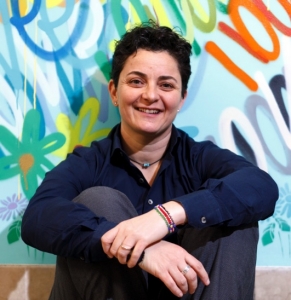 If this is a country based on immigration and welcoming huddled masses, we should be doing it better.

The daughter and granddaughter of Syrian refugees, Luma grew up in Amman, Jordan, where she was one of the only Arab students in her class at an American school, and one of the only girls who played on her soccer team. As a young adult in a country where being gay was considered a crime, Luma came out to her parents and was disowned. Eventually granted asylum in the United States, Luma navigated the broken immigration system to build a life for herself, finishing college, opening a coffee shop, and coaching soccer.

Through the non-profit, she founded in 2006, Fugees Family, where Luma has helped nearly 1,200 vulnerable refugee children from more than 22 countries. In 2019, Luma was named an Emerson Collective Dial Fellow and a Manhattan Institute Civil Society Fellow.

Watch her interview here as Luma discusses navigating asylum, finding family and being an advocate for the most vulnerable-refugees.