Today, Jill Eisenberg, Director of Curriculum & Literacy Strategy at LEE & LOW BOOKS, offers guidance on curating text sets aligned to the Re-imagining Migration Learning Arc framework. This article is part of our Media Highlight Series, which aims to support curriculum about migration through the exploration of storytelling – this includes literature, film and more. We align selections of media with questions in our Learning Arc.

Migration and immigration are in the news every day. Whether what is going on in students’ communities or families or what they are seeing in the media, students across grade levels are hungry to discuss it and learn about it.

Educators can feel both eager to engage with their students’ interest and also hesitant to “say the wrong thing” or unsure they have found the best resource to explore this topic. On top of all this, educators wonder where migration “fits” into their school’s curriculum.

One way we at Lee & Low Books have seen schools steel themselves against the whiplash of responding to the latest breaking story or crises is to integrate migration into their curriculum and school communities through the curation and use of text sets.

Executed in a strategic, thoughtful process, text sets aligned to the Re-imagining Migration Learning Arc framework enable educators to be purposeful and systematic without compromising quality or rigor for student learning.

Why curate a text set on the three components of the Re-imagining Migration Learning Arc:

Questions to consider in creating a migration text set:

Below is the beginnings of a text set aligned to each section of the Re-imagining Migration Learning Arc. 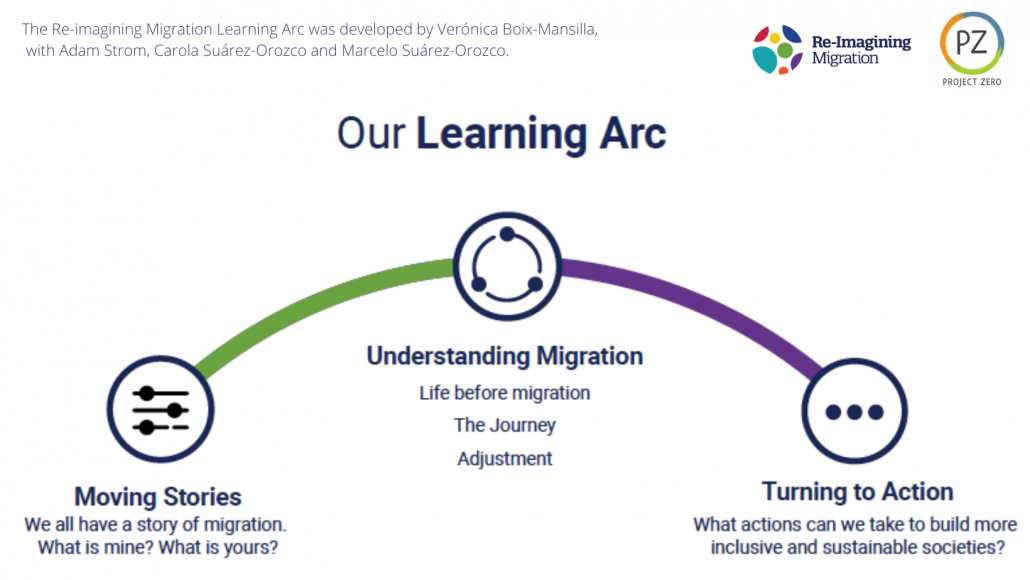 The ultimate goal: We want students to see the richness, relevancy, and impact of migration on our collective history, not just a current event happening today or to only “some” students. Instead we want to convey migration is a shared experience we all have. 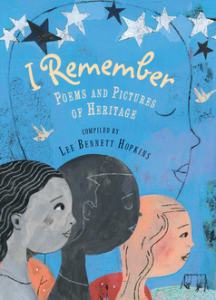 I Remember: Poems and Pictures of Heritage
edited by Lee Bennett Hopkins

This poetry anthology brings together the work of fourteen award-winning poets and sixteen illustrators of diverse backgrounds who share aspects of their childhood experiences in honest portraits of what it was like for them growing up in the United States. Together these heartfelt poems and captivating illustrations shine a light on the rich diversity of people in our nation as well as the timeless human connections and universal experiences we all share. Readers of any age and background are sure to find much that spark their memories and open their eyes. 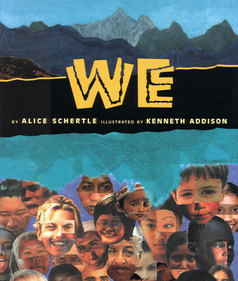 We
written by Alice Schertle, illustrated by Kenneth Addison

Here is the fascinating story of human development, from its beginnings in Africa millions of years ago to modern times. In spare, lyrical verse Alice Schertle highlights the emergence of rich diversity among peoples and the spread of culture, technology and extraordinary societies. 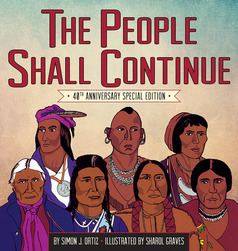 Told in the rhythms of traditional oral narrative, this powerful telling of the history of the Native/Indigenous peoples of North America recounts their story from Creation to the invasion and usurpation of Native lands. Many things changed and became more difficult, but The People continued to farm and create crafts. The People held onto their beliefs and customs and found solidarity with other oppressed people. And despite struggles against greed, destruction of their lands, and oppression, The People persisted. 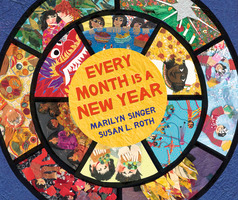 Every Month Is a New Year: Celebrations Around the World
written by Marilyn Singer, illustrated by Susan L. Roth

In many places around the globe, the new year starts on January 1. But not everywhere! All these celebrations, and many others, have deep-rooted traditions and treasured customs. Every month of the year, somewhere in the world people celebrate with joy and good wishes for a happy new year. 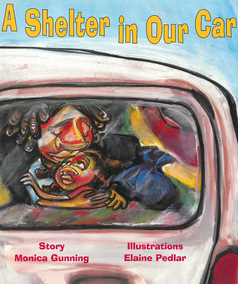 A Shelter in Our Car
written by Monica Gunning, illustrated by Elaine Pedlar

Zettie and her Mama left their warm and comfortable home in Jamaica for an uncertain life in the United States. With Papa gone, Mama can’t find a steady job that will sustain them and so they are forced to live in their car. But Mama’s unwavering love, support, and gutsy determination give Zettie the confidence that, together, she and her mother can meet all challenges. Monica Gunning’s moving and authentic story about homelessness in an American city was developed with the help of the Homeless Children’s Network in San Francisco. 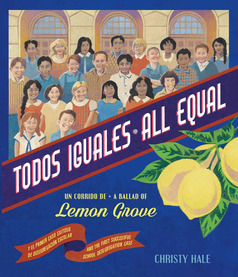 In the summer of 1930 in Southern California, the Mexican families learned of a plan to segregate their children in a small, inferior school. Refusing to let this happen, the parents organized. They filed a lawsuit against the school board, with twelve-year-old Roberto as the plaintiff. On March 12, 1931, the judge announced his ruling, supporting the children’s right to equal education. Here is the little-known story of the first successful school desegregation case in the United States. It stands as an empowering testament to an immigrant community and its tenacity in the fight for educational equality. 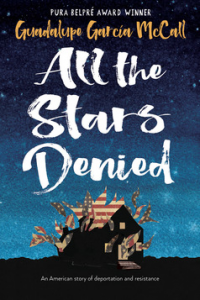 All the Stars Denied
written by Guadalupe Garcia McCall

In the heart of the Great Depression, Rancho Las Moras, like everywhere else in Texas, is gripped by the drought of the Dust Bowl, and resentment is building among white farmers against Mexican Americans. Author Guadalupe Garcia McCall tackles the hidden history of the United States and its first mass deportation event that swept up hundreds of thousands of Mexican American citizens during the Great Depression. 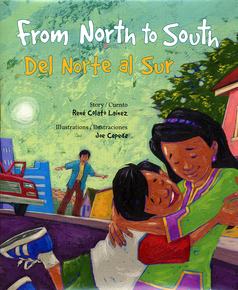 José loves helping Mamá in the garden outside their home in California. But when Mamá is sent back to Mexico for not having proper papers, José and his Papá face an uncertain future. What will it be like to visit Mamá in Tijuana? When will Mamá be able to come home? Award-winning children’s book author René Colato Laínez tackles the difficult and timely subject of family separation with exquisite tenderness. 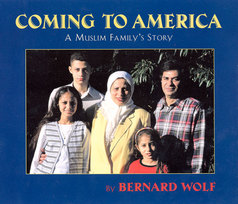 Coming to America: A Muslim Family’s Story
by Bernard Wolf

Rowan Mahmoud’s father arrived in the United States eight years ago from Alexandria, Egypt, in search of a better future for his family. After four years of hard work and frugal living, he could finally afford to bring his wife and children to live with him. Young Rowan and her family are Muslims. The transition to American life has not been easy for the Mahmouds, but devotion to family and religion keep them strong. With captivating photographs and engaging text, Bernard Wolf invites us into the life of this close-knit family — a family whose love and courage speak for all immigrants who work hard and make sacrifices in the pursuit of a better life. 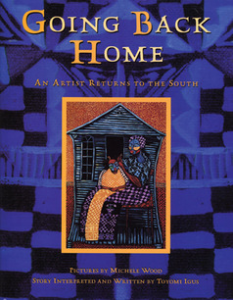 Going Back Home: An Artist Returns to the South
written by Toyomi Igus, illustrated by Michele Wood

More than half a century after her family moved North to find a better life, artist Michele Wood returned to the South to see and experience the land where her ancestors lived, struggled, and thrived. In Going Back Home, Michele presents a series of paintings inspired by this personal journey. Through her complex and richly patterned art, Michele places herself back in history, imagining her ancestors’ struggles to overcome hardship through family love and community. 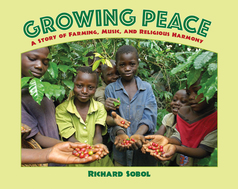 Growing Peace: A Story of Farming, Music, and Religious Harmony
by Richard Sobol

On the morning of September 11, 2001, J. J. Keki, a Ugandan musician and coffee farmer, was in New York, about to visit the World Trade Center. Instead, J.J. witnessed the terrorist attack on the Twin Towers. Back home in his village, J.J. was determined to find a way for people who held different religious beliefs to work together. He saw that the neighborhood children, from Jewish, Muslim, and Christian families, played with one another without a care about religion. Together they would grow, harvest, and sell their coffee. At the same time, they would bridge religious differences to work and live together peacefully. From J.J.’s vision, his community has achieved what many people strive for: a growing peace. 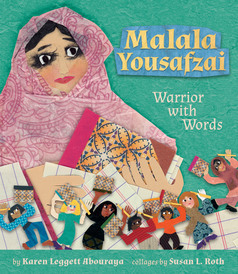 Growing up in Pakistan, Malala Yousafzai loved books and school. But in 2009, the Taliban came to power and closed all schools for girls. Malala, just eleven years old, began to speak and blog about the right of all children to receive an education. She was shot by a Taliban gunman, but her life-threatening injury only strengthened Malala’s resolve. This book is more than a biography of a brave, outspoken girl who continues to fight for the millions of children worldwide who are not able to go to school. It is also a testament to the power of education to change the world for girls and boys everywhere. 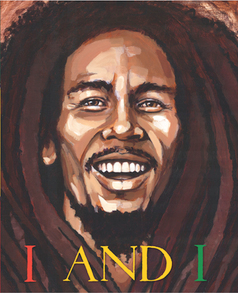 I and I Bob Marley
written by Tony Medina, illustrated by Jesse Joshua Watson

Born in the Jamaican countryside in 1945, Bob Marley seemed special from birth. The curious, intuitive boy had an extraordinary gift for absorbing and interpreting the world around him. Influenced by his biracial heritage, his island home, and the injustices he observed in everyday life, Bob went on to become a musician and messenger; a poet and prophet of reggae culture. His music echoed from Jamaica all the way across the globe, spreading his heartfelt message of peace, love, and equality to everyone who heard his songs. 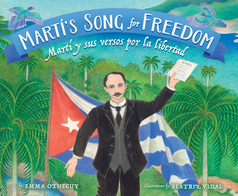 José Martí believed freedom was the inherent right of all men and women. But his home island of Cuba was colonized by Spain, and some of the people were enslaved by rich landowners. Enraged, Martí took up his pen and fought against this oppression through his writings. By age seventeen, he was declared an enemy of Spain and forced to leave his beloved island. Martí traveled the world, speaking out for Cuba’s independence. But throughout his exile, he suffered from illness and homesickness. This book is a beautiful tribute to a brilliant political writer and courageous fighter of freedom for all men and women.

Rise!: From Caged Bird to Poet of the People, Maya Angelou
written by Bethany Hegedus, illustrated by Tonya Engel

Writer, activist, trolley car conductor, dancer, mother, and humanitarian–Maya Angelou’s life was marked by transformation and perseverance. In this comprehensive picture-book biography geared towards older readers, Bethany Hegedus lyrically traces Maya’s life from her early days in Stamps, Arkansas, through her work as a freedom fighter to her triumphant rise as a poet of the people. 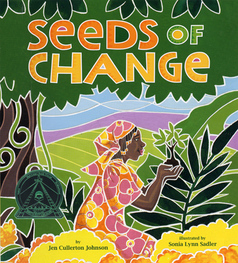 Seeds of Change: Planting a Path to Peace
written by Jen Johnson, illustrated by Sonia Sadler

This book brings to life the empowering story of Wangari Maathai, the first African woman, and environmentalist, to win a Nobel Peace Prize. Engaging narrative and vibrant images paint a robust portrait of this inspiring champion of the land and of women’s rights.

What aspects of the framework would you love to address in your school or classroom using a thematic text set? What questions, challenges, or suggestions do you have around their creation and implementation? Add your thoughts to the comments below! 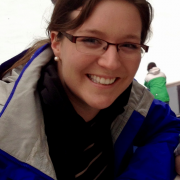 Jill Eisenberg is the Director of Curriculum and Literacy Strategy at LEE & LOW BOOKS, the largest independent children’s book publisher specializing in diversity and multiculturalism. Before joining LEE & LOW, Eisenberg was a Fulbright Fellow in Taiwan where she taught English as a foreign language to grades 2–6. She went on to become an ELA teacher for third grade in the Bay Area in California and has been passionate about best practices for supporting English Language Learners and parent engagement ever since. At LEE & LOW BOOKS, she oversees strategic partnerships and provides product and literacy expertise to schools, districts, and literacy organizations. Learn more at The Open Book blog.

Back to School Resource Collection