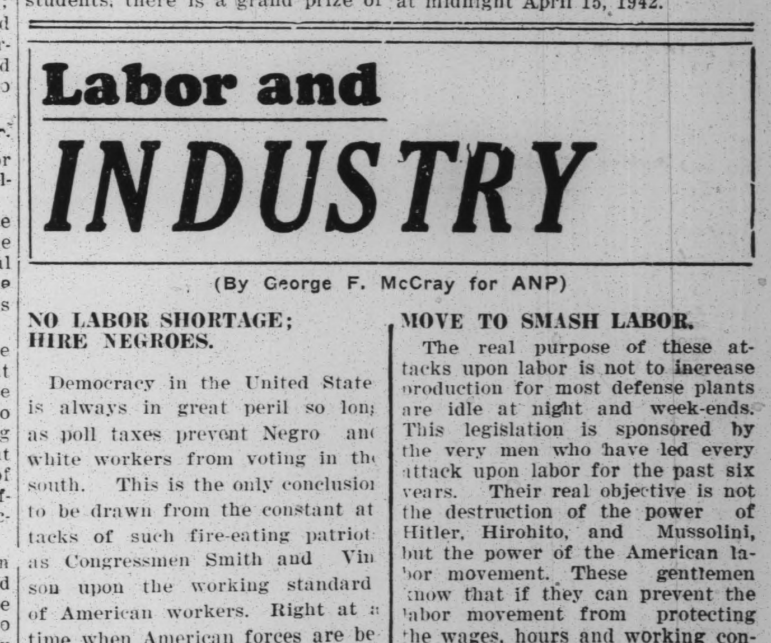 Democracy in the United States is always in great peril so long as poll taxes prevent Negro and white workers from voting in the south. This is the only conclusion to be drawn from the constant attacks of such fire-eating patriots as Congressmen Smith and Vinson upon working standard of American workers. Right at a time when American forces are being defeated wherever and whenever they meet the enemy, right at a time when we need to bend out every effort to bring the morale of this nation to peak efficiency, these gentlemen introduce a bill in congress to plunge the country into veritable civil war.

These words are weighed carefully. Labor will fight to the last bit of its power to prevent the enactment of any legislation that will have the effect of destroying the labor movement. Hitler’s agents in this country could wish for nothing better than a move to suspend union contracts, the 40 hours week, and the union shop.

Nobody yet has proved there is a labor shortage in this country. Millions of workers, white and colored, male and female, qualified to do defense work are unemployed. There is no need to work a few workers to death while others walk the street hungry, seeking work. There are still enough qualified workers in this country to allow employers to continue their discrimination against workers because of the race, religion, and nationality of such workers.

The real purpose of these attacks upon labor is not to increase production for most defense plants are idle at night and week-ends. This legislation is sponsored by the very men who have led every attack upon labor for the past six years. Their real objective is not the destruction of the power of Hitler, Hirohito, and Mussolini, but the power of the American labor movement. These gentlemen know that if they can prevent the labor movement from protecting the wages, hours and working conditions of the millions of American workers who are now members of unions, the unions themselves will perish.

It is my guess that a majority of congressmen will be sensible enough to vote against the latest Smith attack upon labor. Somebody will pass the work around that John L. Lewis is patiently waiting for the Roosevelt administration to boot labor out of the door. In times like these the beatle-browed man from Alexandria is a tough customer to deal with.

As those lines were written it i[s] reported out of Washington that congressmen are being deluged with telegrams and letters from people back home declaring themselves in favor of the attack on labor. That is not at all surprising for the few of the men who are really doing the defense work of the nation know who their congressmen are, rarely use their phones to send telegrams, and as yet don’t know what is happening to them in Washington.

A Negro observing this very nasty situation cannot help but wonder if the men who really run this country would rather plunge it into paralyzing political civil war, rather than hire a man because of his race, creed or color. 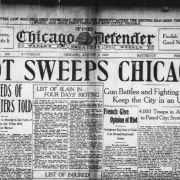 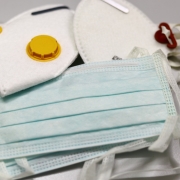 Image by Jeyaratnam Caniceus from Pixabay Undocumented and COVID Positive 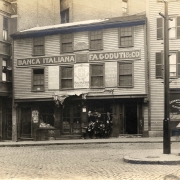 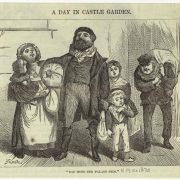 The Jewish Diaspora in New York