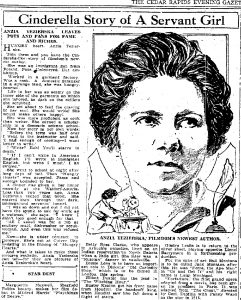 I first read Anzia Yezierska’s Hungry Hearts in 1993, when I was working at the Tenement Museum on the Lower East Side of New York. When I was finished, I read the Bread Givers. The stories transported me inside the old, boarded up tenements to the world of my grandparents and my great-grandparents, speaking in a language I don’t know. They also took me into other tenement buildings, those that were inhabited by newer immigrants, speaking Spanish and dialects of Chinese that, again, I didn’t really know either. How different was the world of Yezierska’s stories to the lives of the people I passed and nodded at in the streets?

At the time, many visitors came to the museum to revel in the nostalgia of their immigrant past. Nostalgia can be a beautiful thing. But, in the gallery of the museum, and in the talks I gave, I wanted to make sure we didn’t leave the story of immigration in the past. While many visitors recognized the continuity of the neighborhood’s role as a home for new immigrants, others sought to distance the stories of their families from the newcomers living on the Lower East Side at the time. Their side comments often included familiar stereotypes, people were unclean, they refused to speak English.

I think I was able to connect past and present because of what I read from Yezierska. In her presentation of the juxtaposition between the Jewish world of Orchard, Essex, and Hester streets from life north of Delancy street, we are introduced to be what seems to be a universal gulf that we need to learn how to cross, between what Yezierska presents as “polite” society, and those trying to adjust to life in the United States. It may sound cliched, but her characters, often sketched broadly, were archetypes, but types that you could recognize, and even sympathize with if you spent time getting to know them, and were attuned to the world around you.

I’m convinced that Anzia Yezierska is one of the most important America writers that hardly anyone remembers. That wasn’t true in her lifetime. A film publicist crowned her the “sweatshop Cinderella.” Yezierka’s writing gained national attention, in fact, a movie based on her short story collection “Hungry Hearts” was made in 1922 and a second film was made out of another of her novels just a few years later. Adding to her fame, Yezierska had a romantic relationship with one of America’s foremost educators and philosophers, John Dewey.

In her writing about the world of Jewish immigrants on the Lower East Side of New York just before and after the turn of the 20th century, there is very little sentimentality, nor does she attempt to polish the edges, or cover her characters flaws. While some critics have found the stories overwrought, others appreciate the resolve and determination of her characters. The protagonists in her writing were often quite poor, eating scraps while living in crowded tenements owned by greedy landlords. They were hungry, not just metaphorically. Yezierska wants us to recognize the ambition, and sometimes the futility of the ambition, of her immigrant peers, searching for the America that they dreamt of as they fled anti-semitic pogroms in Russia.

Linked are two short stories from Yezierska’s Hungry Hearts. The first, “The Lost Beautifulness” is about a mother who works to fix up her apartment for her boy in the military. The second story, “Soap and Water” contrasts the clean and proper world of the upper classes with an unwashed immigrant seeking to better her life.

Written nearly 100 years ago, with particular attention to a community that no longer exists, Yezierska’s stories raise timeless dilemmas facing newcomers hoping to make their way in a new world. I’d love to teach her stories to students today (I would recommend using her work with students in late middle school or high school). In a literature class, it might be interesting to contrast the experiences of her characters with more contemporary immigrant literature including Sandra Cisnero’s classic, The House on Mango Street, Girl in Translation, Americanah, or The Book of Unknown Americans.  Would children of immigrants see their experience mirrored in Yezierska’s stories or would the melodrama of her writing, and the occasional Yiddish expression, get in the way? Would descents of earlier generations of immigrants be able to make connections, past, and present? I hope so.

Too often we assume that in the past immigrants left poverty and oppression abroad, and after passing the Statue of Liberty, they arrived in the United States, learned English and blended in without looking back. Yezierska’s world is about those struggling to become American. In one of Yezierska’s most powerful stories, she writes about a woman whose son has moved her out of the immigrant ghetto to a fancy uptown apartment, yet she longs for the old neighborhood. Here Yezierska reminds us of a very important lesson, often part of becoming is being forced to leave some of the old world behind. In literature, and in life, those choices don’t seem fair. We need to find a way to respect multiple belongings. As humans, we are this and that, not this or that. At a time when discussions of immigration are often fraught, we would be better prepared for civil dialogue and understanding if we took the time to get to know our collective past. While I have spent almost 25 years, exploring history and human behavior, I’ve always believed in the power of a good book.

This link opens an online edition of the full Hungry Hearts short story collection.Below is a short clip from the 1922 film. 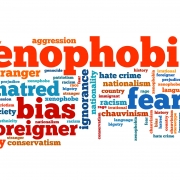 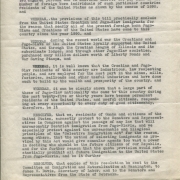 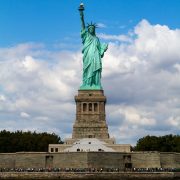 Emma Lazarus’s “The New Colossus” and The Statue of Liberty 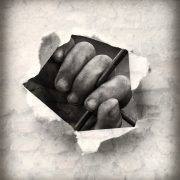 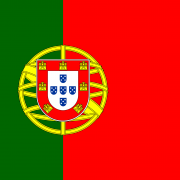