Note: The teaching ideas in this lesson are adapted from Facing History and Ourselves and we link to the original lesson for details and the original context.

Pope Francis has long stressed the obligation to show kindness to strangers, refugees, and migrants in his sermons and public remarks. On September 29, 2019, he unveiled a vision of his message, a monument cast in bronze, in St. Peter’s Square in Rome.

Writing in the New York Times, Elisabetta Povoledo writes, “The work, “Angels Unaware,” by the Canadian artist Timothy P. Schmalz, depicts 140 migrants and refugees from various historical periods traveling on a boat, and includes indigenous people, the Virgin Mary and Joseph, Jews fleeing Nazi Germany and those from war-torn countries.” 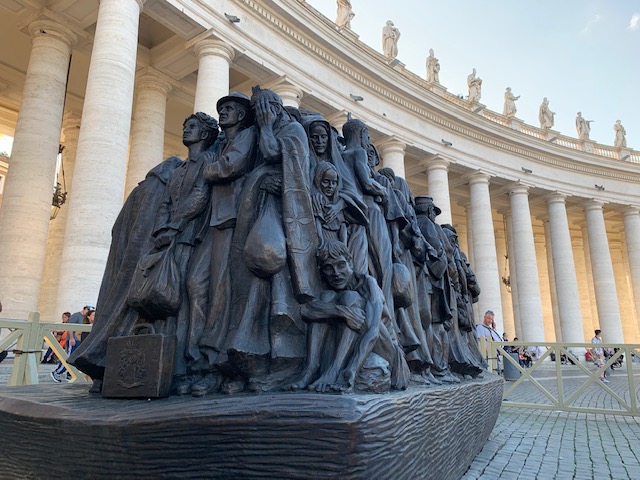 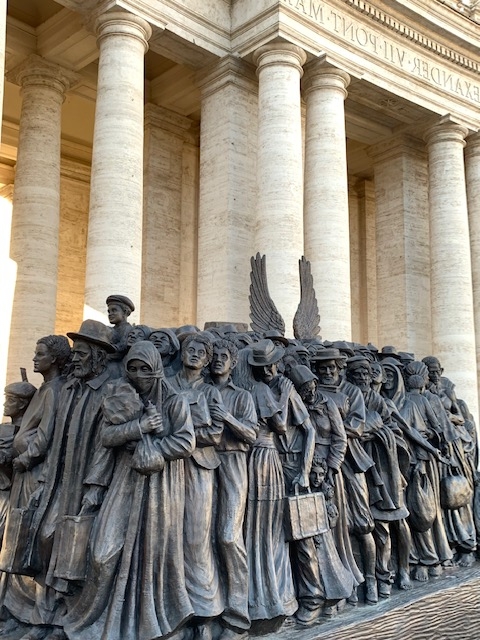 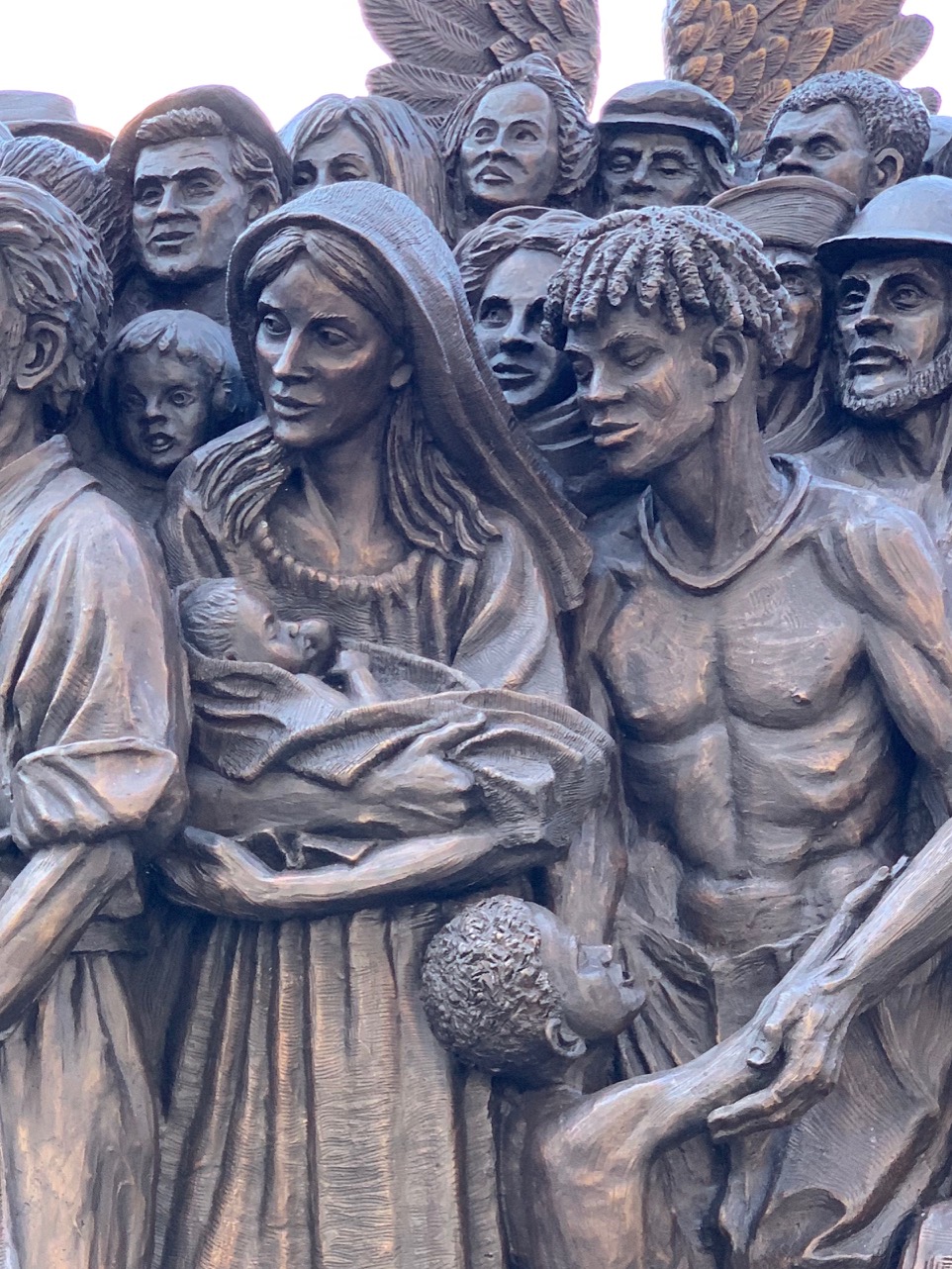 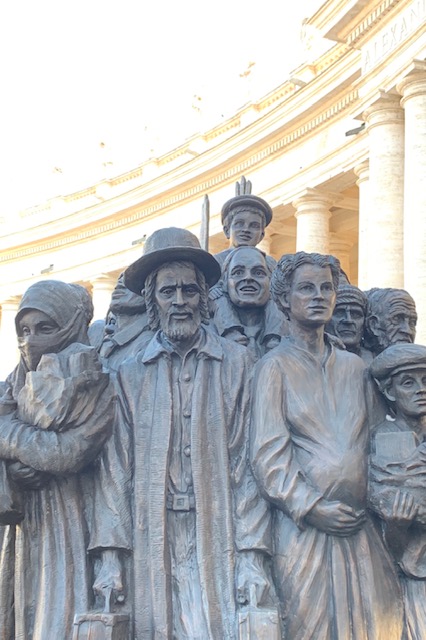 At the dedication the Pope explained, in deeply religious and Catholic terms, that caring for migrants is not just about migrants. His words linked responsibility to newcomers with his vision of what it means to embrace a Christian life. He told the crowd:

Violent conflicts and all-out wars continue to tear humanity apart; injustices and discrimination follow one upon the other; economic and social imbalances on a local or global scale prove difficult to overcome. And above all it is the poorest of the poor and the most disadvantaged who pay the price.

The most economically advanced societies are witnessing a growing trend towards extreme individualism which, combined with a utilitarian mentality and reinforced by the media, is producing a “globalization of indifference”. In this scenario, migrants, refugees, displaced persons and victims of trafficking have become emblems of exclusion. In addition to the hardships that their condition entails, they are often looked down upon and considered the source of all society’s ills. That attitude is an alarm bell warning of the moral decline we will face if we continue to give ground to the throw-away culture. In fact, if it continues, anyone who does not fall within the accepted norms of physical, mental and social well-being is at risk of marginalization and exclusion.

For this reason, the presence of migrants and refugees – and of vulnerable people in general – is an invitation to recover some of those essential dimensions of our Christian existence and our humanity that risk being overlooked in a prosperous society. That is why it is not just about migrants. When we show concern for them, we also show concern for ourselves, for everyone; in taking care of them, we all grow; in listening to them, we also give voice to a part of ourselves that we may keep hidden because it is not well regarded nowadays.

“Take courage, it is I, do not be afraid!” (Mt 14:27). It is not just about migrants: it is also about our fears. The signs of meanness we see around us heighten “our fear of ‘the other’, the unknown, the marginalized, the foreigner… We see this today in particular, faced with the arrival of migrants and refugees knocking on our door in search of protection, security and a better future. To some extent, the fear is legitimate, also because the preparation for this encounter is lacking” (Homily in Sacrofano, 15 February 2019). But the problem is not that we have doubts and fears. The problem is when they condition our way of thinking and acting to the point of making us intolerant, closed and perhaps even – without realizing it – racist. In this way, fear deprives us of the desire and the ability to encounter the other, the person different from myself; it deprives me of an opportunity to encounter the Lord (cf. Homily at Mass for the World Day of Migrants and Refugees, 14 January 2018).

“For if you love those who love you, what recompense will you have? Do not the tax collectors do the same?” (Mt 5:46). It is not just about migrants: it is about charity. Through works of charity, we demonstrate our faith (cf. Jas 2:18). And the highest form of charity is that shown to those unable to reciprocate and perhaps even to thank us in return. “It is also about the face we want to give to our society and about the value of each human life… The progress of our peoples… depends above all on our openness to being touched and moved by those who knock at our door. Their faces shatter and debunk all those false idols that can take over and enslave our lives; idols that promise an illusory and momentary happiness blind to the lives and sufferings of others” (Address at the Diocesan Caritas of Rabat, 30 March 2019).

“But a Samaritan traveller who came upon him was moved with compassion at the sight” (Lk 10:33). It is not just about migrants: it is about our humanity. Compassion motivated that Samaritan – for the Jews, a foreigner – not to pass by. Compassion is a feeling that cannot be explained on a purely rational level. Compassion strikes the most sensitive chords of our humanity, releasing a vibrant urge to “be a neighbour” to all those whom we see in difficulty. As Jesus himself teaches us (cf. Mt 9:35-36; 14:13-14; 15:32-37), being compassionate means recognizing the suffering of the other and taking immediate action to soothe, heal and save. To be compassionate means to make room for that tenderness which today’s society so often asks us to repress. “Opening ourselves to others does not lead to impoverishment, but rather enrichment, because it enables us to be more human: to recognize ourselves as participants in a greater collectivity and to understand our life as a gift for others; to see as the goal, not our own interests, but rather the good of humanity” (Address at the Heydar Aliyev Mosque in Baku, 2 October 2016).

“See that you do not despise one of these little ones, for I say to you that their angels in heaven always look upon the face of my heavenly Father” (Mt 18:10). It is not just about migrants: it is a question of seeing that no one is excluded. Today’s world is increasingly becoming more elitist and cruel towards the excluded. Developing countries continue to be drained of their best natural and human resources for the benefit of a few privileged markets. Wars only affect some regions of the world, yet weapons of war are produced and sold in other regions which are then unwilling to take in the refugees produced by these conflicts. Those who pay the price are always the little ones, the poor, the most vulnerable, who are prevented from sitting at the table and are left with the “crumbs” of the banquet (cf. Lk 16:19-21). “The Church which ‘goes forth’… can move forward, boldly take the initiative, go out to others, seek those who have fallen away, stand at the crossroads and welcome the outcast” (Evangelii Gaudium, 24). A development that excludes makes the rich richer and the poor poorer. A real development, on the other hand, seeks to include all the world’s men and women, to promote their integral growth, and to show concern for coming generations.

….“We ourselves need to see, and then to enable others to see, that migrants and refugees do not only represent a problem to be solved, but are brothers and sisters to be welcomed, respected and loved. They are an occasion that Providence gives us to help build a more just society, a more perfect democracy, a more united country, a more fraternal world and a more open and evangelical Christian community” (Message for the 2014 World Day of Migrants and Refugees).

…In a word, it is not only the cause of migrants that is at stake; it is not just about them, but about all of us, and about the present and future of the human family. Migrants, especially those who are most vulnerable, help us to read the “signs of the times”. Through them, the Lord is calling us to conversion, to be set free from exclusivity, indifference and the throw-away culture. Through them, the Lord invites us to embrace fully our Christian life and to contribute, each according to his or her proper vocation, to the building up of a world that is more and more in accord with God’s plan.

What is the purpose of a monument? What purpose does this monument serve? As you consider your answers, note the imagry, the placement, the title, as well as Pope’s understanding of the current climate.

The Pope’s words were directed to a Catholic audience and may of his references are from Catholic and Chrstian texts. Yet, the Pope is a public figure whose actions and words are considered important by many non-Catholics. We think that it is worth reading the except above with students, however we recognize that some might be uncomfortable with the deeply religious text. The point of including it here is to better understand how the Pope hopes to shape the way people think about migration. It is not included as an endorsement of religion. If you choose to read the text with students, consider: What message was he trying to send to Catholics? As you read it, how might non-Catholics respond to his message? Are there particular lessons the Pope hoped to impact to Catholics? Are there universal ideas that might resonate beyond his Catholic followers?

How might monuments to migration shape the way people think about migration and migrants? What would they need to look like to make an impact? Where would they need to be? Consider adapting this lesson from Facing History and Ourselves to engage students in analysis of the monument in this lesson and to guide them through the creation of their own monument about migration. While the lesson as written is about monuments to the Holocaust, encourage your students to imagine they were going to build a monument to migration. What imagry would you use to send your message? Where would you want it placed? What might they say at the monument’s dedication?