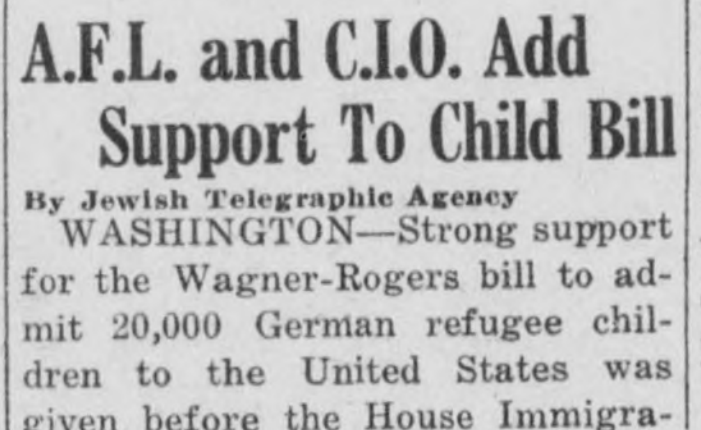 WASHINGTON—Strong support for the Wagner-Rogers bill to admit 20,000 German refugee children to the United States was given before the House Immigration Committee. The hearing was featured by reading of a letter from President William Green of the American Federation of Labor urging passage of the measure. Joseph A. Padway, A. F. L. counsel who read the message, declared it was personal as the organization itself had taken no official action on the issue. Other witnesses endorsing the bill included actor Joe E. Brown, who flew from Hollywood to testify; Frank Graham, president of North Carolina University; Clarence E. Pickett, executive secretary of the NonSectarian Committee for German Refugee Children, and Miss Katherine Lenroot, chief of the Children’s Bureau of the Labor Department.

John Brophy, national director of the Congress of Industrial Organizations, told the committee that organized labor had no fears of an undue influx of refugees resulting from the Wagner-Rogers bills. Approval of the bill is only a small token of the C. I. O.’s opposition to what is going on in the Reich, Prophy said. Gaynell Hawkins, of Dallas, president of the Texas Social Welfare Association, endorsed the legislation, saying that an “amazing decline” in this country’s birthrate necessitated bringing more children here.