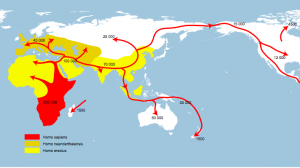 It is August, a time when, although technically on vacation, many educators in the United States have already turned their attention to their classrooms. Some teachers are buying supplies; others are rewriting lessons and curricula. Most are doing both. A lot of us are thinking about our students and how we can create learning environments that will allow all of them to thrive.

Unfortunately, the messages our young people are getting from the wider world often run counter to the conditions we try to create in our classrooms.  In this year’s summer heat, across much of the world, the rhetoric about immigration is scorching. On broadcast and social media, accusations fly.  As an educator, it has become evident that as a public we don’t know very much about migration, and we sure don’t give it the kind of attention it deserves in the education of young people. If we take the role of schools seriously as training grounds for civic engagement, it is time to rethink how we approach these issues in schools.

The story of migration is the story of humankind. The genetic and paleontological record of human migration is at least 60,000 years old. Researchers know that all humans can trace their origins to Southern Africa, while some homo sapiens migrated across Africa and stayed, others ventured out to the Asia, Australia, Europe, and eventually to the Americas. This is our shared experience.

The stories of these ancient journey’s testify to our ingenuity as a species, and as we scrutinize them, they challenge us to think about our identities as individuals, groups, and nations. We are a people that have been on the move for a long time.

The 21st century has new patterns of migration –  from rural villages to cities, from region to region – that are worldwide. Carola Suárez-Orozco, Marcelo Suárez-Orozco, and Robert Teranishi explain the context:

All continents are involved in the mass movement of people: as areas of immigration,  emigration, or transit, and often, as all three at once….During the second decade of the 21st century, 244 million people are international migrants (or 3.3% of the world’s population),1 approximately 750 million are internal migrants, and millions more are immediate relatives left behind.Only China (1.36 billion) and India (1.28 billion) have larger populations than today’s “immigration Nation.”

Since the dawn of the millennium, the world has been witnessing a rapid rise in the numbers of a plurality of migrants —involuntary, internal or international, authorized or unauthorized, environmental refugees, and victims of human trafficking. These flows have intensified under the ascendancy of globalization, growing inequality, rachitic and collapsing states, war and terror, and climate change…Worldwide, civil and ethnic wars, structural violence, environmental cataclysms, and growing inequality are behind the largest displacement of people since World War II. Of the over 60 million forcefully displaced, half are children.

Teaching about migration as an ongoing theme in the human condition provides a lens to explore our past and ask new questions. In different periods in the history teach, or in the literature we read, what were the push and pull factors that influenced the people to migrate? Those choices often involved facing great risk and uncertainty. To what extent were the choices to migrate made voluntarily? To what extent were those choices forced upon people due to conflict, war, or economic exploitation? By recognizing the continuity and the changes across time in experiences of migration, we also create the conditions for a more civil conversation about current stories. To return to an earlier metaphor, it turns down the heat.

Histories of migration and integration are reminders of the amazing abilities of humans to adapt to new circumstances.  At the same time, these stories expose the faultlines communities develop over who can belong and who cannot belong. Do we ask newcomers to assimilate, and give up their old customs, in order to fit in? Often histories of migration reveal records of integration, a two-way exchange between newcomers and the dominant society. These are the frequently unexamined stories behind our customs, foods, and language. The history of migration, in fact, is the history of how we became to be who we are today.

Migration to the United States in the 19th and 20th centuries challenged the country to redefine what it meant to be an American. As newcomers came, what role would religion and race play in the national identity of the nation? These questions remain with us and are negotiated within every generation. In recent weeks, we’ve seen what happens when civil dialogue about difference breaks down. Democracy itself is at risk. History and literature can provide insights into today’s challenges, but teachers need resources, professional development, and support for their peers, communities, and administrators. When our schools ignore these important civic stories, we risk further polarization, and an opportunity for all of us to better understand what it means to be human.

Below are a few suggested student outcomes and guiding for teaching about migration. I am eager to see your responses. As good teachers know, even if we have been at this a while, we are constantly revisiting and revising our work.

Adam Strom is the Director of the ReImagining Migration Project. Throughout his career, Mr. Strom has connected the academy to classrooms and the community by using the latest scholarship to encourage learning about identity, bias, belonging, history, and the challenges and opportunities of civic engagement in our globalized world.  The resources developed under Strom’s direction have been used in tens of thousands of classrooms and experienced by millions of students around the world including Stories of Identity: Religion, Migration, and Belonging in a Changing World and  What Do We Do with a Difference? France and The Debate Over Headscarves in Schools, Identity, and Belonging in a Changing Great Britain, and the viewer’s guide to I Learn America. Before joining the ReImagining Migration Project, Strom was the Director of Scholarship and Innovation at Facing History and Ourselves.

Identity and Belonging in a Changing Great Britain