Flaming Wok, Utah by Kathy B. via Wikimedia Commons 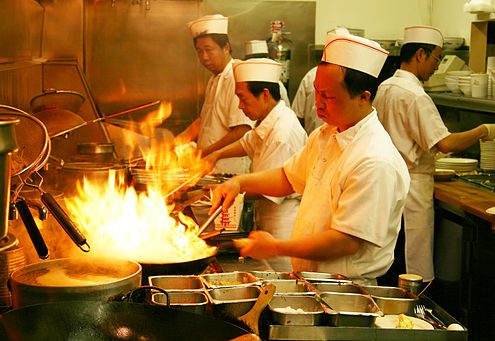 I always find it amusing when I learn that a dish I think of as part of a long-standing cultural tradition has actually been adapted for the new world. I just learned that the bagels and lox I love for Sunday brunch does not connect me, in a straight line, to a ritual invented by my ancestors in Eastern Europe. According to the Jewish Women’s Archive, “Bagels, an afternoon snack food in Europe, became embellished with lox and cream cheese and eventually became an American icon.” I began to explore the relationship between food and migration in the Facing History and Ourselves publication Stories of Identity: Religion, Migration, and Belonging in a Changing World. While food can often become an introduction to a new culture, it can also become a flash point. I wrote:

“For many people in host societies, their first exposure to the changes that come with migration is through the foods immigrants bring with them. Indian curries are now generally accepted as one of Britain’s national dishes. Street food in Berlin now includes Turkish donner kebabs along with other, more traditional German treats. Tourists in Amsterdam and Paris seek out restaurants from former Dutch and French colonies. Couscous (a North African stew) is becoming as Parisian as steak frites (steak with french fries). Not everybody is happy about those changes; some people are worried that their culture is being lost.”

For our students, these stories can provide a window into the experience of migration. In them, we see the precarious balancing act of, on one hand, preserving culture, and on the other, adapting to the norms of the new world. We are also reminded that integration is a two-way street. While we often focus on the way that migrants pick up the traditions of their new home, newcomers bring new foods, new ideas, and new traditions that are often adopted by the receiving society. You don’t have to look hard for the evidence. Just walk down Rue de Rosiers in Paris and check out the line at L’As du Fallafel, filled with people waiting for some of the best middle eastern sandwiches you will ever find.

One of my favorite pieces from the Stories of Identity collection is Identity in Diaspora, the short reading is set in a kitchen in Kent (a county in the South East of England). As they prepare a meal, the father shares Afghani stories to his daughter. While they made pilau, an Afgan rice dished, the daughter asked,

How could my father expect us to be truly Afghan when we had grown up outside an Afghan community? When we went back home, wouldn’t we children be strangers, foreign­ers in our own land? I expected, and possibly hoped for, the soothing account of our triumphant and imminent return to Paghman. It didn’t come. My father looked tired and sad. His answer startled me: “I’ve given you stories to replace a community. They are your community.”

He picked up a packet of dehydrated onion. “Stories are like these onions—like dried experience. They aren’t the original experience but they are more than nothing at all. You think about a story, you turn it over in your mind, and it becomes something else.

For many of us, the exchange presents a familiar challenge, retaining elements of our past and our cultural traditions, while creating new identities for ourselves. Each of us answers that challenge in our own way. The particular details in stories of migration, whether from our tradition, or someone else’s, can be illuminating; through the stories of others, we gain insight into our own lives.

AJ+, which describes itself as “news for the connected generation, sharing human struggles, and challenging the status quo.” Just released Chinese Food: An All-American Cuisine, a three part series of short videos on the experiences of Chinese immigrants to the United States. The blog Here’s What Chinese Menus Can Teach Us About Immigration provides a wonderful introduction to the collection. Below, I have embedded the first video in the series, How Chop Suey Saved San Francisco’s Chinatown.  Make sure to check out the rest of them.

Below are a few guiding questions that you can explore using the resources presented in this post.