We live in an era of mass migration — an era of 1 billion people on the move, 258 million living outside of their native countries and 68.5 million displaced people in the world. This goes beyond a recent phenomenon, as migration has been a fundamental part of our shared history as human beings. Humans have been on the move since we first walked the planet, before walls and national borders. Yet, in the US and across the globe, instances of anti-immigrant bias and discrimination are drastically increasing. The need to be aware and to humanize the experiences of migration is more pressing than ever. 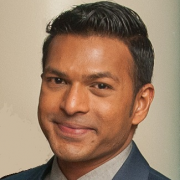 This work has led us to the The Immigrant Learning Center in Malden, MA where we spoke with Denzil Mohammed, Director of their Public Education Institute. The educational institute’s work focuses on specialized online educational, local and national research initiatives and collaborative public events that promote immigrants as economic and social assets to the US.

Denzil moved to the US ten years ago from Trinidad and Tobago to pursue higher education in Boston. Since he was six years old, he dreamed of moving and living permanently in the US, he says, “for multiple reasons. I think the lure of America is so strong outside of the US – the idea of the American dream, of opportunity, and the concept of me being able to live my fullest potential.”

AG: Denzil, how did you come to do this work?

DM: My background is in communications, media and journalism, so for public education, the idea is how to communicate all this information, this research, these facts, this data, best practices on immigrant integration, on immigrant education to the public. So that’s where my communications came in, plus my love for research and public speaking. It was a wonderful way for me to channel my strong feelings about equality and justice through mission-oriented work, so I found something that was very purposeful and personal. The ironic thing was that at that time I did not consider myself an immigrant. I was an international student, a foreigner, the word “immigrant” I didn’t ascribe to myself. The idea of people calling themselves “immigrants” is sometimes a little alien – but at this moment in time, I suspect that people feel that term much more strongly than before.

AG: What are your short term and long term goals at the Public Education Institute?

DM: Firstly, going forward, we have multiple audiences we want to reach more deeply, one of them is educators. The entire immigrant-serving field is really our audience. But a greater focus on teachers, K-12 and adult educators. We have such a fantastic network of experts. We are seen as a source for this niche kind of work of preparing and educating teachers for immigrant student success.

Secondly, continuing to reach across the aisle of the immigration debate…in our webinars and workshops.

Thirdly, we’re looking for innovative ways of getting our work out there through different media and searching for what is needed in the field that is currently not being addressed. One of the main things we’ve focused on since the election is the immigration narrative. How do we communicate about immigrants? How do we connect with people about immigrants? We hosted a webinar called Taking Back the Immigration Narrative after the elections – there is so much demand for that information. We’ve done work on this for public schools in Massachusetts and Texas, and at conferences across the country.

Currently, what we’re looking for going forward is filling that gap – what is the next gap we need to fill that people aren’t talking about, where we can be instrumental?

AG: We’ve been thinking a lot about the importance of education about migration across schools, community organizations, museums, etc. We’ve noticed a pattern of blind spots across educational institutions and we’d love to hear your thoughts on these:

Have you encountered these issues? If so, how do you navigate them?

DM: The newcomer bias is a very reactive way of operating, and it emphasizes that it’s [migration] this singular, discrete thing as opposed to something that is always happening – people are always moving, always migrating.

With current events, especially in this moment, given how much demand there had been for our work on the immigration narrative with schools, from Waco to Brookline, shows that there is so much focus on what is happening now in terms of hate crimes, anti-immigrant rhetoric, anti-Semitism. It’s very understandable that teachers want to have a deeper understanding of not just what is happening now, but as you said, how we got here. I’ve seen a lot of especially this current event bias because of what is continuing to happen with this administration. So much seems so overwhelming because it’s happening at such a pace. And there’s so much that is happening with immigrants, visas, backlogs, delays, deportations – that we can’t even explain all of that to teachers, for them to fully grasp what it is.

In terms of navigating them, connecting them to realizing how cyclical a reaction to immigrants, has been in this country. [Italians, Irish, Germans, Mexicans, everyone]… Throughout our history, every group has experienced backlash, not just in terms of rhetoric, but in terms of policies, of violence. Understanding the idea that migration is something that happens – that people move, it’s a natural phenomenon. We spoke to a school in Brookline, to fifth graders, and the first question we asked them was “has anyone here moved?” Almost everyone raised their hands – they moved from another state, another town, or from one street to another – they understand the concept of moving, and that it takes effort. There are certain results and consequences, so, connecting it to students’ lives and the lives of teachers is crucial to building understanding.

One of the things we just learned in the webinar we did with (Re-imagining Migration’s) Adam Strom [Teaching Immigration Now] and in previous webinars is for teachers to understand their own biases, situations, views of immigration, immigrants, of “others” and prejudice. And as a result, how they approach immigration topics, and how they actually receive the interpersonal relationships with their students and students’ families. So that takes it out of the current events kind of context into a very personal context of:

Those are some of the ways we’ve navigated these biases.

AG: What are some initiatives, research and events that you would like to see highlighted?

DM: The Immigrant Learning Center has 3 arms. Firstly, the free English language program, with about 450 students enrolled on any given date. The second arm is our Public Education Institute, which educates Americans about immigrants. The third arm is the Institute for Immigrant Research at George Mason University – that’s our research arm, they do research at local and national levels.

Some of the things we will be doing going forward are:

First, we will be disseminating research on education & immigration as they relate to each other.

Second, we have a page on our website [Educator Webinars & Educator Resource Library] that we would like to consider an information hub for immigration in education. It’s a collection of all our past webinars, recordings, resources, but there are many other things we’ve put there from you [Re-imagining Migration], from ADL Education, from Teaching Tolerance, from Facing History. For the whole spectrum of teachers, so we are trying to make that into an immigrant student success teacher resource center on the Internet. So, the more places we can have that page linked as, you know, this is all about immigration in education, for teachers at every level – what you need to know, what you need not just in terms of general information, but in terms of actual teaching strategies, lesson plans, and ideas. We house everything there. The page has a wealth of over 10 years of doing this work with teachers in person and online.

Third, more collaboration. My mantra as Director of this Institute has been to collaborate as much as possible and see where there are intersections. We talk about one of the things teachers should do – go out in the community. Well, how do we intersect the school and the community? What kinds of events, initiatives and partnerships would foster that? So, more collaborations. We’ve been doing that pretty successfully at a community level, with Salem, Millis, Brookline, Boston, Texas (Literacy Texas), and others. We’re seen as a resource for immigration information, taking back the immigration narrative. It’s more valuable than ever before that teachers in school districts have this information.

DM: On a very basic level: getting facts out there through research, data and statistics. There’s such a dearth of real information on immigration in the US, despite us being a nation of immigrants, people don’t understand the immigration system. They think 50% of the population is foreign-born – it’s actually 13.6%. They think the majority of immigrants are undocumented, which is not true.

So, one, getting a lot of the basic facts out there through our own work, through the Institute of Immigrant Research – distributing their research. Two, doing a lot more work on the immigrant narrative – emphasizing how to communicate about immigrants and immigration, values and stories. In order for people to connect with this, we have to find ways that they can truly grasp the idea of immigration as not this foreign thing. It’s through stories, through emphasizing common values, through fostering understanding. In various ways, we will look to be doing that kind of work and helping other organizations do that more successfully.

More partnerships with community and other organizations that maybe traditionally did not think about immigration – public libraries, museums, community organizations, education organizations, law firms, business organizations, many of whom realize they need to somehow be more informed, or take a public stance, educate their staff, etc. – that’s another way for us to counter the misinformation.

And talking more to children, to students. Children now are more informed than ever before as to what’s happening because they are so connected to the Internet. They are aware of what’s happening and they’re developing very conflicting views about immigration – which is okay, you can have conflicting views about immigration. You can think of us as a land of immigrants, but yet that we’re being overrun. Helping children be more critical in how they process information, helping them start from a fact-based place – (had a boy come up to me at Park School in Brookline, when I first went there last year, after I spoke, and said ‘everything you said, my parents say is not true. My mother works for the government and she’s saying – no… you’re saying that immigrants are not criminals but she’s saying they are criminals. I don’t understand…’) We need to start from a place of facts, and see what the facts say. They [children] are trying to understand it themselves so helping them start with the facts, realize how connected they are to newcomers to their class. Seeing the things they have in common.

In various ways through writing, op-eds, blogs, profiles, social media for sure, data and research – emphasizing how deeply intertwined our communities are with immigration and with new Americans. That is probably the biggest part of the story. People think that it’s an immigration issue, about “those people”, about “them”. That it’s geographically an “other”, as opposed to people you know – realizing how intertwined people’s lives and communities are with immigration. You can’t just build a wall and deport people, you will suffer too. A lot of it has to do with language emphasizing how things that happen to immigrants have a bigger effect. For instance, the idea of undocumented immigrants paying billions in taxes supports the well being of all Americans, it’s not just about “them”.