The front page of the New Orleans Times-Picayune after the defendants were acquitted.

In the late 19th century, New Orleans had the largest population of Italian immigrants in the South, many of them from Sicily. During that time, anti-Immigrant attitudes were swelling across the country. Italians were stereotyped as uneducated, unwilling to integrate, and criminals. Racist depictions of Italian immigrants flourished in popular media, which impacted how many people across the country saw them. Writing in Smithsonian Magazine, Brigid Katz describes what happened.

It was amid that tense climate that New Orleans police chief David C. Hennessy was gunned down by unknown assailants while walking home from work. Rumors began to swirl that as Hennessy lay dying, he used a derogatory slur for Italians to identify his murderers. The fallout was devastating: individuals of Italian descent were arrested en masse and 19 people, including a 14-year-old boy, were indicted in connection to the crime, reports Meagan Flynn of the Washington Post. There was no solid evidence against them; of the nine sent to trial, six of the accused were acquitted and the attempt to prosecute an additional three men ended in a mistrial. And yet, they were thrown back into prison with the rest of the accused, making it impossible for them to escape the violence that was to come.

News of the acquittals unleashed a fury in New Orleans. Residents speculated that the Mafia had influenced jurors, and local papers urged citizens to gather in the streets and “take steps to remedy the failure of justice,” reports Flynn. The mob, which included a number of prominent New Orleans, pushed into the prison and shot and mutilated 11 men.

“Outside the jail, the larger mob cheered as the mutilated bodies were displayed,” writes Blakemore, describing the grizzly scene. “Some corpses were hung; what remained of others were torn apart and plundered for souvenirs.”

A Washington Post article from March 1891 described the lynching, falsely claiming that the victims were members of the Mafia. Despite the fact that they had not been found guilty, the Post’s headline declared, “Vengence Wreaked on the Cruel Slayers of Chief Hennessy.”

Writing for the Italian Sons and Daughters of America, Roseanne Montillo explains that the lynching has both National and International implications:

Secretary of State James G. Blaine assured Pasquale Corte, the Italian Consul in New Orleans, that this incident was not directed against the Italians as “a race,” but only toward a specific few.  An earlier correspondence between the two had been less than cordial.  Weeks earlier, Corte had written to Blaine and explained his fears that his countrymen were being maltreated while held prisoners.  But Blaine, in a less than polite note, had replied: “The Sicilian who comes here must become an American citizen and subject his wrongs to the remedy of the law of the land, or else there must be no place for him in the American continent.”

Now, these Italians were dead, thanks in part to the laws that handful of them had taken into their own hands.  And no one would pay for those crimes.

Given that no formal indictment was brought against the guilty party and that Secretary Blaine had been unable to remedy the situation, on March 31st, 1891 the Italian Minister Baron W. Faic, announced that upon instructions from the Italian government, he was withdrawing from Washington and severing diplomatic relations with the United States.  This turn of events caused not only a great stir politically, but also much frenzy throughout the country, where many Italians were immigrating.

On December 9, 1891, in a message to congress, President Benjamin Harrison declared that the Italian incident was a “most deplorable and discreditable incident,” and “an offense against law and humanity.”  It did not “have its origin in any general animosity to the Italian people, nor in any disrespect to the Government of Italy, with which our relations were of the most friendly character.”

To further show that there was no animosity toward the Italians, President Harrison subsequently paid reparations of $25,000 to the Italian government.  He announced this on his annual message of December 6, 1892.  Although this appeased the Italian community in the United States and abroad, President Harrison was heavily criticized for it, particularly by the New Orleans papers, who did not appreciate their actions being referred to as “a most deplorable and discreditable incident.”

In 2019, over 120 years after the lynching, the Mayor of New Orleans, LaToya Cantrell, issued a formal apology for the city’s response to the lynching. Today, this incident is recognized as one of the largest mass lynchings in U.S. history. However, readers should not forget that lynchings of African Americans in Louisiana, the South, and in the United States as a whole were much more common than the lynching of immigrants. According to the Equal Justice Initiative, there were “more than 4400 lynchings of Black people in the United States between 1877 and 1950.” 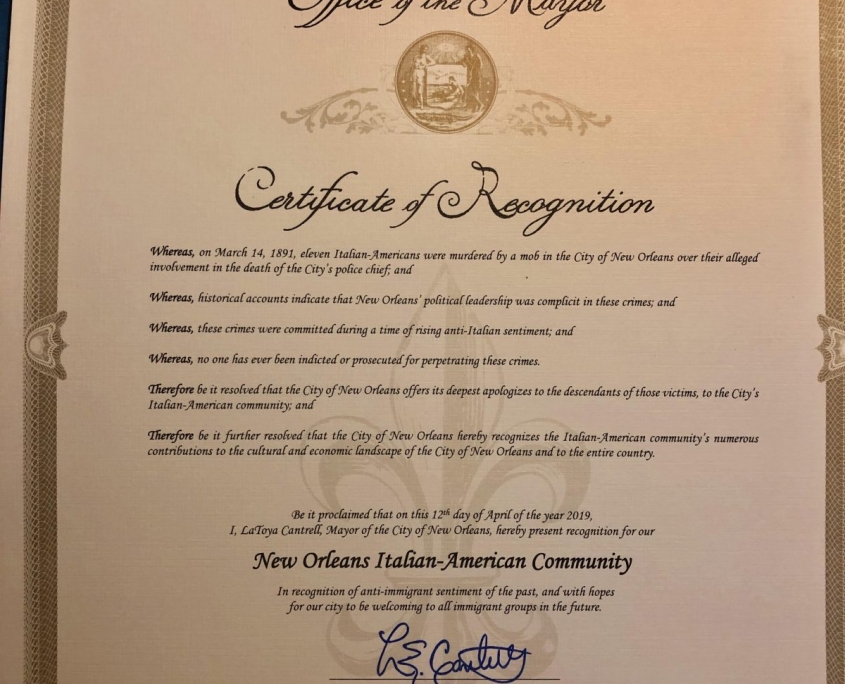 Introduction to Moving Past