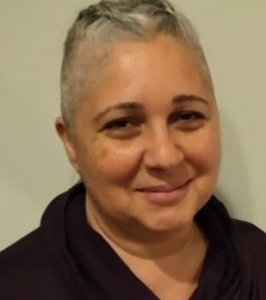 Dr. Zeina Zaatrai is Director of the Arab American Cultural Center at University of Illinois, Chicago, is the adjunct faculty in the Anthropology Depart and teaches at the Honors College.

What is your migration story?

I first came to the US as a graduate student to do my MA in Anthropology at Iowa State University in January 1995. After finishing I moved to California to do my Ph.D. in Anthropology and Feminist Theory at the University of California at Davis. When I came to the US, I was the second person in my extended family that had been to the US. My cousin had moved here around 1990. Since then, my sister also moved to the US to do her PhD at Rutgers University and currently lives with her family in California. My parents and my brother are all still in Lebanon. I have two cousins who are in California and my aunt and her Palestinian husband and grown kids now with their families are in Canada. Having been in Kuwait when the first Gulf war happened, they had to leave and after a few years in Lebanon they ended up in Canada. My two kids are growing up in the US as mixed white and Arab and I struggle to keep their knowledge of the Arabic language.

Why did you choose education?

Initially, when I was young and somewhat naive, I thought I needed a position of influence to help create some change in the world and that is partly why I left Lebanon and worked to pursue my higher education. As the years went by and I grow my understanding of how change happens, I began engaging in a number of different arenas, the non-profit world, community and student organizing, feminist global movements, philanthropy, and knowledge production. After I got my PhD, I worked for years in the non-profit sector and primarily worked in the Arab region but kept up my research and engagement with others to produce knowledge. I am drawn to education as a pedagogical tool that can aid social justice and community organizing to help create change. As it became clear that my kids will grow up in this world, in the belly of the beast, I felt it important to turn my professional attention more to what is happening here in my backyard and began thinking more about the experiences Arab American kids have in this country. I am not only interested in ensuring that my kids and other Arab American young people have a sense of pride of their background and language, but also in ensuring that they:

a) expand their repertoire of what it means to be Arab or Arab American;

b) interrogate ‘givens’ within our society that have contributed to the oppression and subjugation of many folks from within and without our community (various racial, sexual, gender, ethnic or religious groups);

c) refuse to use the rhetoric of anti-Arab and anti-Muslim so common in this country as a pretext to turning inwards, forcing homogeneity, rather than celebrating and acknowledging plurality and difference;

d) grow our intersectionality muscle to ensure that we not only pay attention to the injustice in Palestine or Syria, but also the injustice to the earth and our environment and to communities that live next door to us; and

e) cultivate a practice of kindness as a political vision of enacting love rather than fear.

What influence does your identity have on your work?

My identity has had a tremendous influence on my work. In a piece I wrote a while back, I used the notion of ‘carrying history in my back pocket’ as a way to speak about the significance of my identity in the work I do. My history is not only my own personal experiences but also my peoples’ history, the good and the ugly and it is one I constantly want to learn from and interrogate. It is not a static history, but one that I am constantly learning about and reflecting on. My own experiences of growing up as a girl and then a young woman in South Lebanon with constant war and under Israeli occupation, have taught me early one what injustice looks like and the passion I inherited from my parents to always work towards justice even when the outlook seems grim is also part of that history that influences the decisions I make and the way I approach the world.

What would you like others to know about Arab-Americans?

That we are diverse and different. It is hard to say Arab-Americans are this or that, but for me few things that I love about some of our backgrounds, even if we do not all share them is that family is important, that some of us love passionately and argue over food and politics, that kitchens and food is how we show our love, and that our grandmothers are sublime beings.

Why is it important to you that students see themselves in the curriculum and/or day to day school environment?

Study after study has demonstrated what we already knew, that when students do not see themselves represented in the textbooks, curriculum, etc.. they are taught, they dissociate, they think there is something wrong with whom they are or how things look at home, they feel disempowered, and they are less likely to do well in school. This is true for little kids as it is for adults. I recall as a graduate student taking a class on a specific topic where not one of the readings covered anything related to the region, while there were three of us in class working on the region. It made it harder to think why this class was relevant to me or my work. For students in K-12 and in college, it makes them think that Arabs must not do science, are not notable for history to mention them, etc… But it is important for non-Arab students as well because if Arabs are not mentioned nor appear in any science, history, or social studies courses, then all that they are left with is the media stereotypes. If we want to really create a true multiracial democracy in this country then we need all of us to be well versed in that diversity that exists all around us. And that means truly understanding the plurality of our experiences, celebrating our diversity, and figuring out how we are interconnected.

What actions would you recommend to help build more inclusive communities around Arab Americans?

There is a lot that can be said here. But I do think that key among them is a transformed educational system/curricula across the US starting with daycare to high school and beyond. It is not okay that kids learn about Ancient Egypt and the pyramids as if they have no continuity to a proud and thriving people today who have been struggling to live with dignity. It is not okay that Palestine is totally erased in maps and social studies courses. It is not okay that kids don’t know that God and Allah are the same thing. There has been an amazing effort to create a new ethnic studies curriculum in California that we all should learn from and pay attention to the struggle to ensure that Arab/Arab American history is part of that narrative. This material should be required courses/reading for students across the country. That means reframing what we think is American history when we teach it and not consider optional reading as if these were/are optional people/history. For collective healing from the legacy of white supremacy and racial and other injustice in this country, we all need to learn, read, and engage with many times ugly realities and celebrate those who are speaking up and who have written and/or remembered ‘alternative’ histories, histories of resistance, resilience, and survival. This should happen at all levels of educational institutions including staff and teachers as well as students. Another important area is demographic categorization. At University of Illinois Chicago and for other university campuses, we have been asking the university to recognize our community as a minority and provide us with our own racial/demographic category to help our students be less invisible on campus. Having information about our student body would better inform the university of how well it is doing in supporting these students and provide the students with tools to be able to advocate for themselves as well.