Why do so many people see multiple identities and multiple belongings as a threat? Among the most common stereotypes that are ascribed to immigrants is that they are not loyal to their new country. Visible signs of identity and culture are often read as proof that immigrants are holding on to their past at the expense of the new. In the U.S., it is common to hear people complain that today’s immigrants refuse to speak English or that they are unwilling to fit in. To be American, some argue, you need to give up your ties to your ancestral homelands. Although the exact definition is in dispute, many would call that assimilation.

Others would argue that we need a new word, or a different goal: integration. Harvard sociologist and Chair of the National Academies of Sciences, Engineering, and Medicine committee that drafted the report, “The Integration of Immigrants into American Society,”  Mary Waters explains that “Integration is the process by which members of immigrant groups and host societies come to resemble one another.” 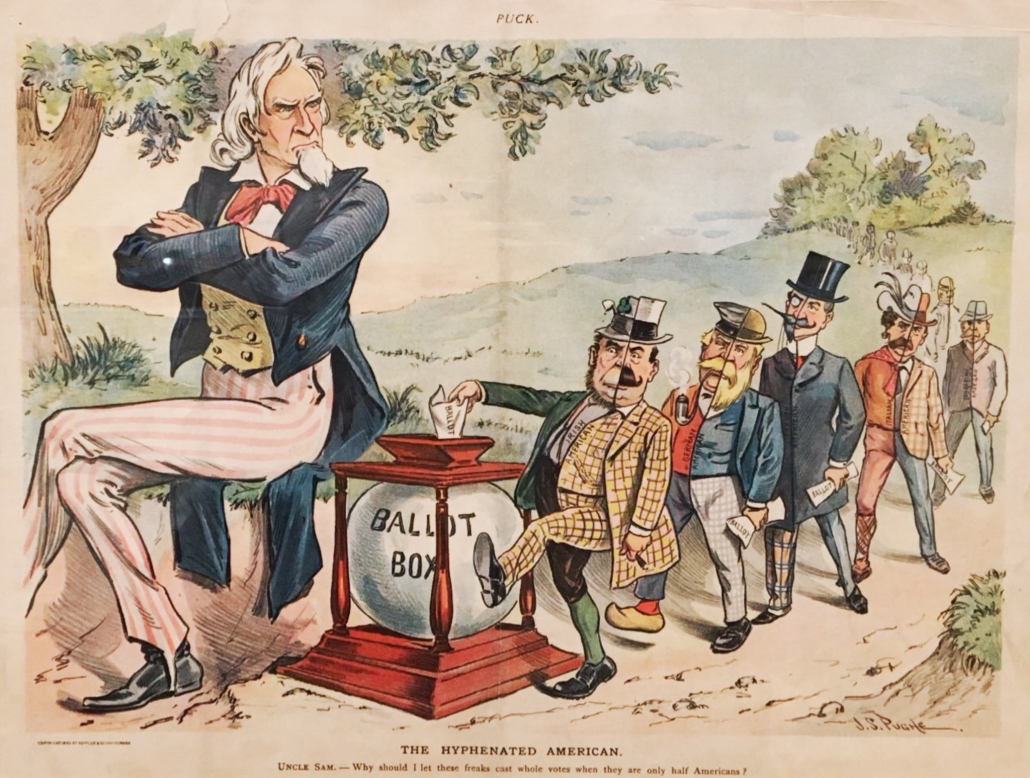 Cartoon from Puck, August 9, 1899 by J. S. Pughe. Uncle Sam sees hyphenated voters and asks, “Why should I let these freaks cast whole ballots when they are only half Americans?”

Not everyone believed, or still does believe, that assimilation or integration of immigrants is a good thing. Francis Galton, Charles Darwin’s cousin, helped to found a movement called Eugenics that claimed to use the tools of science to improve society. In 1904, Galton defined Eugenics as, “the science which deals with all influences that improve and develop the inborn qualities of a race.” He, and those that followed him, including the American scientists Charles Davenport and Harry Laughlin of the Eugenics Record Office, were leaders of a tradition of scientific racism that believed that humans could be categorized into races and those races could be ranked in order of intelligence and productivity. While their ideas have been thoroughly discredited, they were and, unfortunately still are, profoundly influential. Indeed, Eugenics has played a significant role in the national conversation about immigration. In fact, between 1911 and the passage of the immigration restriction act of 1924, Davenport and Laughlin testified before Congress several times to advocate limits on immigration. 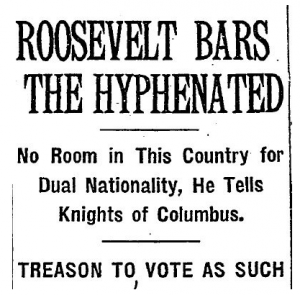 On May 31, 1916, Roosevelt addressed the Knights of Columbus, a Catholic fraternal organization, on what he called “the subject of Americanism.”

When the United States joined the Allies in World War I, the loyalty of German Americans came into question. They weren’t the only newcomers being stereotyped. Italian immigrants and Jews were seen by some as disloyal and dangerous. Immigration from China was severely restricted by the Chinese exclusion act of 1882. It was within that context that ex-President Theodore Roosevelt weighed into the conversation. He believed that he knew what it took for immigrants to become American. On May 31, 1916, Roosevelt addressed the Knights of Columbus, a Catholic fraternal organization, on what he called “the subject of Americanism.” I have selected excerpts below and a full transcript is available here.

I stand for straight Americanism unconditioned and unqualified, and I stand against every form of hyphenated Americanism. I do not speak of the hyphen when it is employed as a mere convenience, although personally, I like to avoid its use even in such manner. I speak and condemn its use whenever it represents an effort to form political parties along racial lines or to bring pressure to bear on parties and politicians, not for American purposes, but in the interest of some group of voters of a certain national origin, or of the country from which they or their fathers came.

Americanism is not a matter of creed, birthplace or national descent, but of the soul and of the spirit. If the American has the right stuff in him, I care not a snap of my fingers whether he is Jew or Gentile, Catholic or Protestant. I care not a snap of my fingers whether his ancestors came over in the Mayflower, or whether he was born, or his parents were born, in Germany, Ireland, France, England, Scandinavia, Russia or Italy or any other country. All I ask of the immigrant is that he shall be physically and intellectually fit, of sound character, and eager in good faith to become an American citizen. If the immigrant is of the right kind I am for him, and if the native American* is of the wrong kind I am against him….

….Now for our own citizens. We represent many different race strains. Our ancestors came from many different Old World nationalities. It will spell ruin to this nation if these nationalities remain separated from one another instead of being assimilated to the new and larger American life.

Some might be tempted to use Roosevelt’s words and authority in support of their feelings about the possibilities and limits of integration, while others might take offense at his language or what they might see as out-dated ideas. History can provide a mirror for today’s discussions of immigration, but it would be a mistake to fail to recognize the context in which Roosevelt was speaking. On a recent episode of BackStory podcast called “The Melting Pot: Americans and Assimilation,” Professor Bruce Schulman places the debate about hyphenated identities in the historical moment in which it was delivered. Schulman considered the implications of Roosevelt’s speech and what it suggested about his views on what it took to become an American.

Listening to the podcast and reading Roosevelt’s text serves as a reminder that today’s debates about the integration of newcomers into the United States have a long history. Despite anxieties, overwhelming evidence suggests that “the newest generations of immigrants are assimilating into American society as fast and broadly as the previous ones.” Unfortunately, stereotypes and biases, in the past, and today as well, do not always answer to facts. We believe that as educators, being able to understand, reflect on, and act on issues of migration are essential civic skills. Moreover, it is impossible to enter into today’s discussions about immigration without learning about the history of immigration. We offer a few ideas on approaching issues of migration in school in our blog Why Teach about Migration?

For more on the National Academies of Sciences, Engineering, and Medicine report on integration, see our blog “Scholar Spotlight: What Everyone Should Know about the Integration of Immigrants in the U.S.”